Chief of the Air Staff Urges Officers to Enhance Operational Preparedness of PAF
The graduation ceremony of the 51st Combat Commanders’ Course was held at Airpower Centre of Excellence (ACE) on January 25, 2019. Chief of the Air Staff (CAS), Pakistan Air Force Air Chief Marshal Mujahid Anwar Khan graced the occasion as the chief guest.
In his address the CAS said: “PAF takes pride in the futuristic and dynamic approach, where we are always open to new ideas. At this juncture, you are academically well-equipped and conceptually better geared to make positive contribution to enhancing operational preparedness of PAF.” He urged the graduating officers to make consistent efforts for grooming of younger fighter pilots and controllers, which is extremely vital for overall war preparedness of PAF. He further added that combat training in PAF can be maintained at the highest standards only if we remain sensitive to contemporary challenges and are prepared to meet them in line with emerging modern concepts.
The CAS also awarded certificates and trophies to the graduating officers who underwent the course. The Chief of the Air Staff Trophy for the best Combat Commander was awarded to Squadron Leader Ahmed Sami while the Air Officer Commanding Air Defence Command Trophy for best Combat Controller was awarded to Squadron Leader Asif Gulzar.
Earlier on his arrival, the Air Chief was received by Air Commodore Fauad Hatmi, Base Commander, PAF Base Mushaf. The ceremony was attended by Principal Staff Officers and field commanders of PAF. 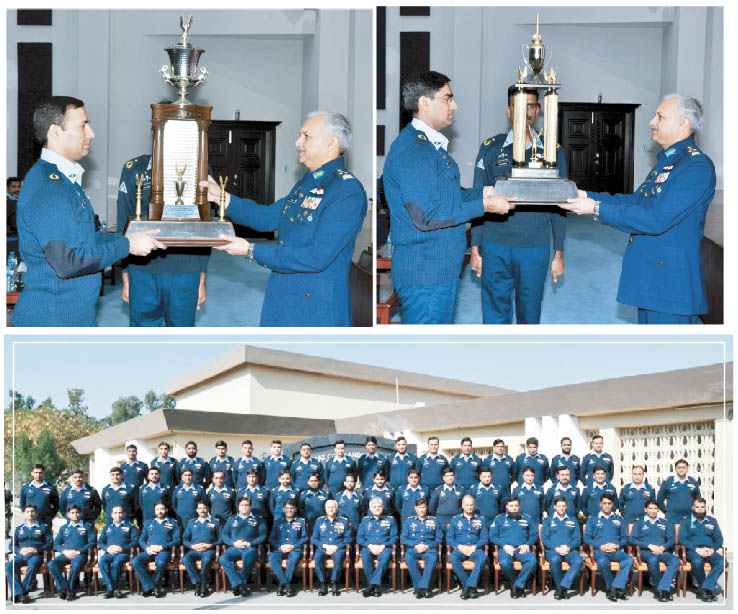