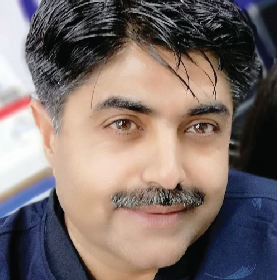 Defense spending directly reflects upon a country’s offensive, defensive including defensive-offensive potential capability. It is an indirect way of estimating a country’s intent, largely political in nature, in terms of near and mid-term political goals. Clausewitz’s approach that ‘war is a mere continuation of policy by other means’ has a relevancy with increasing trended index towards military spending by great and major powers including those who are aspiring to join the major powers’ club, if not great power inter alia India.
It can, thus, be conveniently deduced from the defence spending data that a strong military in tangible gives it an edge in political realm as a real political instrument or in other words ‘continuation of political commerce’ with an ability to exercise it directly or indirectly.
Notwithstanding, there is always a continued need to carry out a realistic comparison of the defence spending between countries who have been rubbing their shoulders with respect to their strategic interests or foreign policy objectives in terms of extending their regions (area) of influence so as to have an assured kind of access to the resources while keeping an eye on the political economies besides retaining their status of global powers.
One will hesitate to deny that it is truly a realpolitik era where no morality exists but a game of survival for the weaker states while the stronger states seek assured strategic interests and extension of their power. The article in hand is an effort to carry out a brief but reality-based analysis of the defense spending by the top ten states besides Pakistan so as to keep an account of what is going to unfold on the near-, mid- and long-term strategic canvas. The defence spending comparison can also be used to ascertain the geopolitical and strategic reasons which prompted the states to maintain their leading defense spending.
Comparison – Global Defense Spending (2019-20)
A bird’s-eye view of the defense spending during 2019-20, reveals that it has been increased overall by almost 2.6% and costed 1981 billion USD as compared to 2018-19. It is the highest since 1988 as revealed by the Stockholm International Peace Research Institute (SIPRI) fact sheet. Besides that, global military spending vis-à-vis global Gross Domestic Product (GDP) indicated a rise by 0.2 points mainly because of the severe impact on global economics caused due to the COVID-19 pandemic that brought the economic activities to almost a grinding halt during the covered period.  As per the SIPRI fact sheet of 2020, the military spending comparison is tabulated below (table 1). 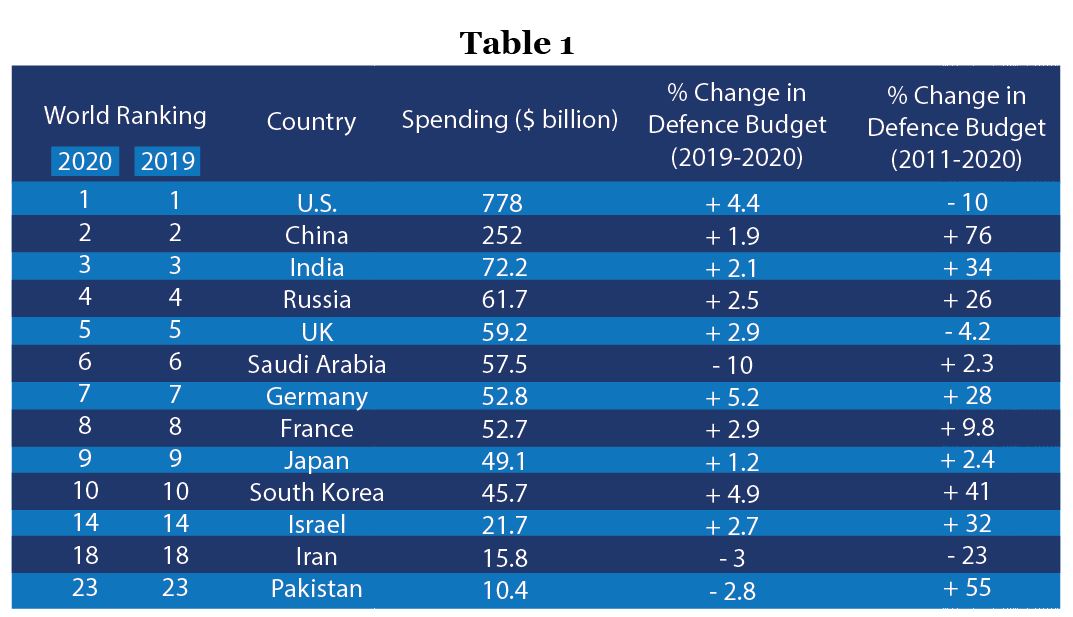 Analytical Conclusions. From the matrix, as quoted by SIPRI, following can be concluded:

▪ The first five largest states i.e., the United Kingdom, India, Russia, China and the United States amount to 62% of the total global military spending.
▪  Among the first top ten states, less Saudi Arabia, all the defense spenders added to their defense budget during the period between 2019-20.
▪  While leaving the U.S. and UK, rest of the top ten defense spenders added substantially to their defense expenditures between 2011-20.
▪ It can easily be ascertained why these top ten defense spenders have opted not only to maintain their defense budget rather opted to increase it further substantially over the 2011-20 decade primarily for security reasons with a mix and match of acquiring offensive, defensive-offensive and defensive capabilities. A critical analysis of the motivating reasons behind the increasing trend of defense expenditure by the top ten states reveals the following arguments:
•  China increased its defense budget primarily to counter the U.S.’ increasing influence in the South China Sea and attached western Pacific, U.S.’ threatening statements for checkmating its economic and strategic influence and lastly to protect its Belt and Road Initiative investment across the world.
•  Similarly South Korea invested in its defense through U.S.’ help to address the threat emanating from its North in the shape of DPRK.
•  The U.S. intends to keep the status quo of maintaining unipolar World Order and checkmate rising China as well as resurfacing Russians so as to maintain a substantial amount of defense budget.
•   Russians, on the other hand need to regain their lost glorious past and are busy extending their zone of influence beyond their shrunk borders in the post-Cold War era, for instance, the Crimean incidents.
•  United Kingdom and France need strong defense forces for the sake of their status as part of the United Nations Security Council (UNSC)’s P-5 states.
•  Germany needs to maintain a strong military due to their haunting past vis-à-vis erstwhile Soviet Union offensive and thus strongly believes in building its military might further as a purely preemptive measure in the face of perceived growing Russian threats.
•   Saudi Arabia has growing perceived threats from its South and West in terms of Yemen and Iran respectively. It has a strong oil-based economy therefore it can afford to buy the costliest state-of-the-art equipment inter alia Ballistic Missile Defense (BMD) System.
•  Japan is one of the important allies in Western Pacific and thus fears the rapidly growing Chinese influence on its sovereignty and security especially in case China is able to imperil Taiwan and Philippines.
•  Last but not the least, India while it is ranked 3rd in defense spending globally, notably it has increased it by 34% from 2011-20. It is for the reasons of making the best use of the opportunity provided by the U.S. and its allies to checkmate China’s increasing influence; embroil Pakistan in the war on terror by Indian state-sponsored terrorism inside Pakistan, especially in Balochistan and erstwhile FATA; exercise dominance in Indian Ocean, Iran and Afghanistan; self-created border disputes with China and Pakistan; forced implementation of Hindutva ideology in and around India; and last but not the least overall attaining the status of Great Power, if not super power, through securing permanent seat in UNSC by portraying its military might.

The writer is Pro-Vice Chancellor and faculty member at DHA Suffa University (DSU), Karachi. He is an expert on strategic and security issues and frequently writes for international and local journals, magazines and newspapers.
E-mail: [email protected]