Exercise Shamsheer-e-Bahr VII is the flagship war game of Pakistan held biennially to try various concepts which are then validated in subsequent navy-wide field exercises before being incorporated into naval strategy. The debrief session of SHAMSHEER-E-BAHR VII and Logistic Exercise TARSEEL-E-BAHR II was held in Karachi. Chief of the Naval Staff (CNS), Admiral Zafar Mahmood Abbasi graced the occasion as chief guest. 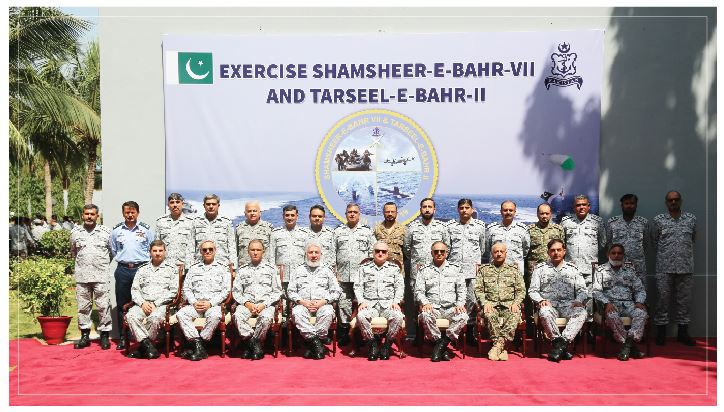 Upon arrival CNS was received by Deputy Chief of the Naval Staff (Operations), Rear Admiral Faisal Rasul Lodhi who was also the Officer Conducting the Exercise (OCE). While presenting the overview, the OCE outlined salient objectives of the exercise, concepts tried during the war game and recommendations pertaining to PN employment and developmental strategies.
Speaking at the occasion, CNS highlighted the significance of war games in reviewing naval war plans in sync with military and national security policy while also exploring operational concepts and refining developmental strategy. He mentioned that “evolving geo-political environment in our region is marred with complexities especially due to recent illegal annexation of Indian Occupied Kashmir (IOK) by the Indian government and the intense oppression and atrocities by Indian Armed Forces in the valley. The present Indian leadership is a product of Hindutva ideology of RSS and is likely to follow radical oppressive policies in IOK which may lead to a conflict with Pakistan to divert world’s attention away from Kashmir.
Therefore, the prevailing environment is likely to continue posing challenges to our national security in foreseeable future. Pakistan Navy, in sync with government policies and other armed forces, is ready in all respects to give a befitting response to any misadventure by the enemy.”
CNS emphasized, “It is incumbent upon us to maintain the highest state of readiness, remain poised and maintain combat potential to ensure seaward defense and protection of maritime interests of Pakistan during peace and war.” He expressed complete satisfaction over conduct of the war game and the recommendations presented to refine operational plans and developmental strategy.
The session was attended by a large number of senior officials of the three services and concerned ministries.