Waste is one of the major driving forces for climate change and with organizations such as the UN providing a platform to address the issue, it is now important to underline the major contributing factors and find alternatives in order to bring a positive impact on the environment. 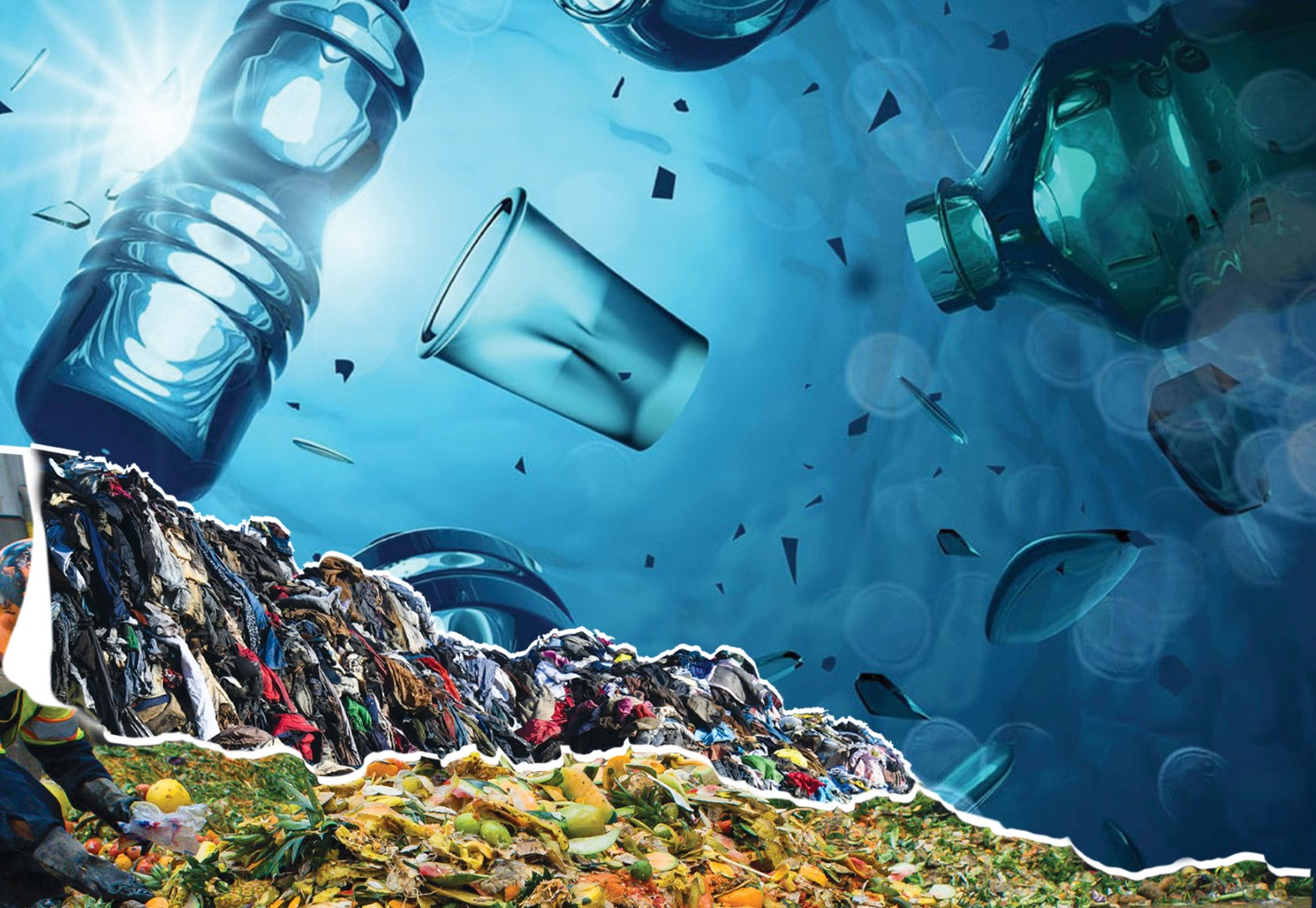 The rise of consumerism in the late 20th and 21st Century has added to the environmental woes of the planet. Consumerism is primarily a western phenomenon related to the foolish belief that somehow happiness depends on obtaining the latest material possessions.  As people gained more disposable income, spending on the latest fast fashion, dining out, buying the newest car, the smartest technology, and travel, grew exponentially. But consumerism came with a dark flipside: a throw-away culture which has led to excessive waste across many sectors of the industry, contributing to toxic landfill and the resulting greenhouse gas emissions along with global warming.
The 2021 report by the Intergovernmental Panel on Climate Change (IPCC) provides new estimates of the chances of crossing the global warming level of 1.5°C in the next decades, and finds that unless there are immediate, rapid, and large-scale reductions in greenhouse gas emissions, limiting warming to close to 1.5°C or even 2°C will be beyond reach. The IPCC report is clear: a human-driven climate crisis is now well under way. The current series of disasters are a direct result of global warming and more disasters will certainly take place unless humanity reduces its greenhouse gas emissions to zero quickly. In short, this means the use of fossil fuels has to be phased out rapidly and the world’s green cover must be protected and enhanced. As has been apparent from the COP26 discussions and final statement, ‘quickly’ is a slippery word. What countries are agreeing to as their phase-out goals is still many decades in the future.

The 2021 report by the Intergovernmental Panel on Climate Change (IPCC) provides new estimates of the chances of crossing the global warming level of 1.5°C in the next decades, and finds that unless there are immediate, rapid, and large-scale reductions in greenhouse gas emissions, limiting warming to close to 1.5°C or even 2°C will be beyond reach.

An existential crisis is looming and consumer concerns are growing. Should we consider the environmental impacts of our purchasing decisions and feel a little guilty sometimes? Yes. Can we contribute to reducing the impacts through informed purchasing decisions? Again, yes. Although the issues seem too complex and are beyond the individual to make a difference, we can focus on the ones that are relevant to everyday life. One is the clothing industry, and the other is food production. Statistics on excessive waste in just these two industry sectors that affect all of us, are startling. Each of these sectors vary between middle to higher income developed countries like the U.S., UK, Europe, Australia, Canada, and others, versus the lower income developing countries like Pakistan. However, they combine to present an alarming scenario on what is driving climate change.
The clothing sector is often overlooked when people think about excessive waste and climate change. But consider this: of the more than 100 billion garments produced globally every year, a staggering 33 percent will end up in landfills within a year. The textile industry is estimated to contribute eight to ten percent of the greenhouse gas emissions annually (approximately 1.2 billion tonnes) and is responsible for 20 percent of the world’s wastewater.
To put the wastewater issue into simple context, how much water is used in the production of just two types of garments is viewed as an example: it takes 2,500 litres of water to make one t-shirt and between 7,500-10,000 litres of water to produce one pair of jeans. Take a look at the clothing in a household wardrobe and multiply it in terms of water used to produce what is hanging there and you get a sense of what this means in terms of the global production of clothing.
Although recycling has the potential to reduce or repurpose waste, as yet only a small percentage of clothing is recycled. In the U.S. alone, 85 percent of all textiles are thrown away and are dumped in a landfill or burned. Globally, over 92 million tonnes of textile waste is estimated to end up in landfills annually. This number is expected to rise by 2030 to over 130 million tonnes. With landfill sites filling up at home and growing protest movements about damage to the environment, some richer countries ship the waste to developing countries that have lesser environmental controls to be disposed of. Containers of clothing waste are shipped to African countries like Ghana where firstly they find their way into used clothing markets in the streets. But much of it is unsaleable even in such markets and ends up in the landfill there. It merely exports the toxic landfill problem to a country less able to deal with the impacts.
The clothing industry, particularly the major brands, already under pressure from consumers and governments in relation to the industry’s impact on climate change, is looking at more sustainable ways to produce textiles. Researchers note that much of the current problem comes down to what our clothes are made from. A garment which is ‘100 percent cotton’ may also contain other elements which are not biodegradable, including, polyester labels and threads, elastine, dyes, and accessories like zips and plastic buttons.
Fortunately, Pakistan has not yet embraced the global consumer ‘throw away’ culture and clothing is more likely to be worn longer and passed on to others. But it does have an important and vibrant textile industry, supplying fabrics and clothing both domestically and to global suppliers. With global brands coming under more consumer and investor pressure about addressing climate change impact, their buyers are now looking for more sustainable solutions in textile manufacture from factories. At the same time, these factories need to remain competitive against the challenges of other textile-producing countries like Bangladesh, Vietnam, and others. If they are able to find workable, sustainable solutions, the textile industry can become a key contributor to reducing the impacts of climate change globally.
Another significant global contributor to excessive waste and greenhouse gas emissions is food production. Again, the statistics are alarming and the reasons vary between middle to high income developed countries and the lower income developing countries.
A staggering statistic on food waste comes from the United Nations. An estimated 1.3 billion tons of all the food produced globally goes to waste, ending up in landfills. This includes food that never leaves the farm, is spoiled in the supply chain, or is thrown out by restaurants, markets, hotels, businesses, and households. At the same time, 800 million people across the world go hungry every day.
The United Nations provides further shocking, descriptive statistics on food waste:
▪  The food we waste and lose every year requires land larger than the surface area of China and India and three times the water in Switzerland’s Lake Geneva to produce. (That’s 257 km3).
▪  If food waste was a country, it would be the third highest emitter of greenhouse gases after the United States and China.
▪  One third of the global emissions come from agricultural production, yet we waste or lose one third of the food we produce.
▪  Reducing global food waste could cut global emissions by eight to ten percent.
▪  More than 80 percent of the world’s hungry people live in places that are highly prone to extreme weather, where a changing climate is only making things worse in food production and crop waste.
When food goes to waste, the energy and water it takes to grow, harvest, transport, and package it, is also wasted. In money terms the cost is huge. But the environmental cost is greater and long lasting. The wasted food which ends up in the landfill produces methane as it rots. Methane is more than 25 times as potent as carbon dioxide at trapping heat in the atmosphere. About six to eight percent of the total human-caused greenhouse gas emissions could be reduced if we stop wasting food. In the U.S. alone, the production of lost or wasted food generates the equivalent of 32.6 million cars’ worth of greenhouse gas emissions.

An innovative initiative combining recycling and new technologies that is gaining traction internationally is recycling plastics for road surfacing. In Islamabad, the Capital Development Authority recently teamed up with Coca Cola and TeamUp to repurpose ten tons of plastic waste using technology to create and develop a bituminous mixture that can provide longer lasting and smoother roads.

In Pakistan, the Ministry of Climate Change and food delivery service, Foodpanda, recently signed an MOU to encourage restaurants using the service to use biodegradable, environmentally friendly packaging. This initiative is a small beginning but a step in the right direction.

While much is expected of governments and global corporations to make responsible climate-friendly investment and production decisions, consumers also have enormous power to bring change. Informed decision-making about what and how much we buy, demanding sustainable quality from suppliers, and embracing recycling will contribute significantly over time to reducing excessive waste and benefiting the future health of the planet.
However, there is a word of warning for consumers who want to make informed decisions and push for environmental accountability. Globally, consumer protection agencies have growing concerns about ‘greenwashing’ in all forms of marketing and packaging. ‘Greenwashing’ is the term given to marketing techniques used by companies to deceive consumers into believing that their products are environmentally sound when in fact they are not. Unsubstantiated, self-declared environmental claims are increasingly used to attract consumers across all sectors, particularly in food and fashion. According to a report by the Organization for Economic Co-operation and Development (OECD) and international consumer protection agencies, these might include buzzwords like “eco-friendly, carbon neutral, green, natural, energy efficient, non-toxic, low carbon, pollutant free, clean, zero emissions, sustainable, ethical, and fair”. While many companies provide ethical, proven environmental information on their products, many do not.
Although laws are being introduced in some countries to make greenwashing practices illegal, the international nature of trade and marketing requires global consumer protection standards on this practice. Meantime, it’s ‘buyer beware’. A quick internet search on the ‘green credentials’ of a company and its products can be revealing. It is worth the extra effort to avoid being greenwashed and to instead find genuine environmentally-sound products.