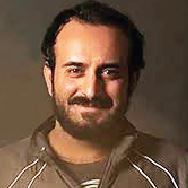 Every expedition to the 8-thousand meter Karakoram giants begins at Skardu. Over the years I have been to this historical city numerous times and have seen it gradually expand and, most recently, embrace the internet revolution. Skardu, at an elevation of 2,500m above sea level is the gateway to the 8,000m Karakoram and the glaciers that surround them. The city is at the edge of the river that divides the Himalayas from the Karakoram. Among other things the area produces one of the best apricots, cherries and apples on the planet. 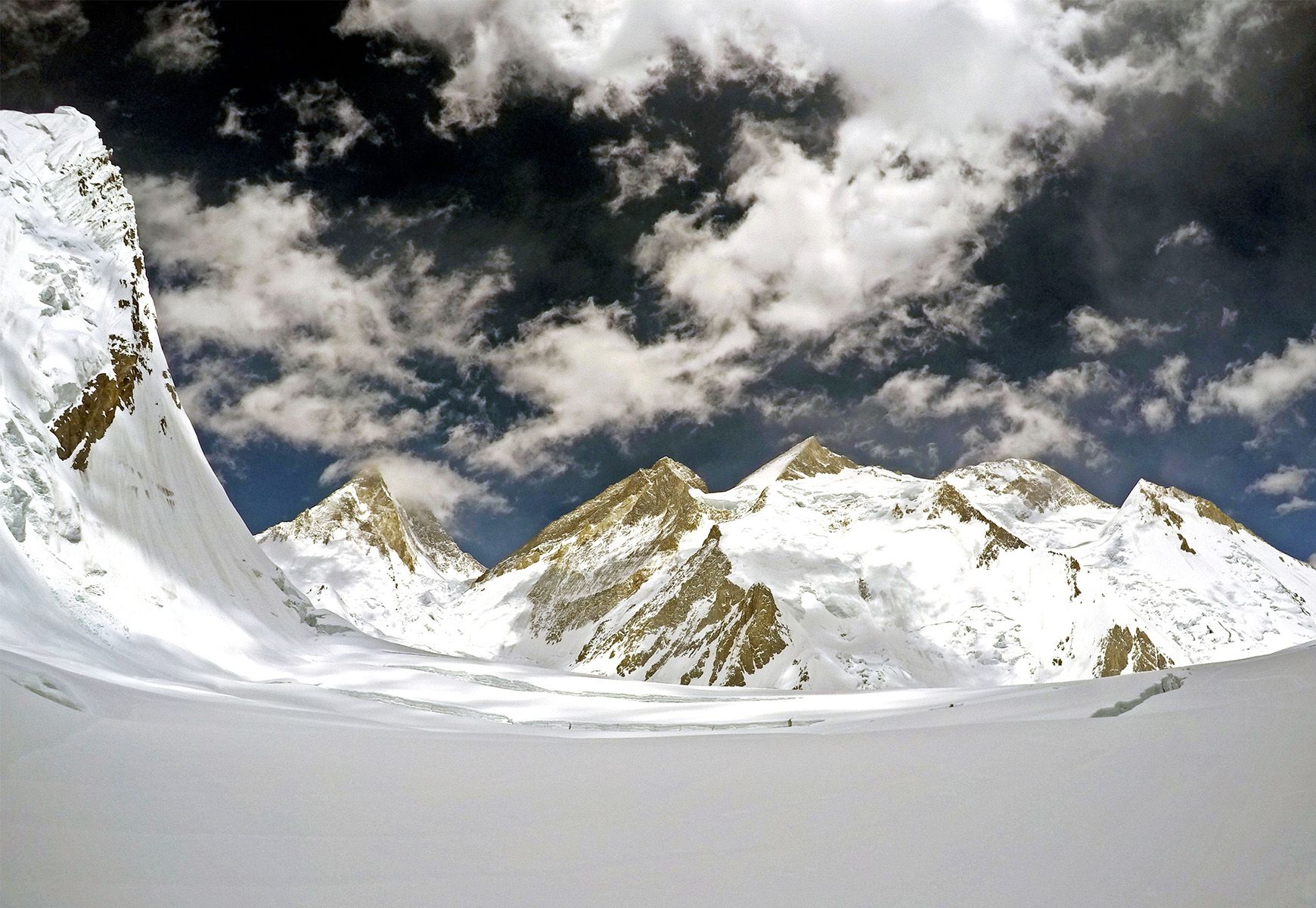 Being a mountaineer and a visual storyteller I am one of few Pakistanis to have successfully reached the summit of a 7,000m peak in the Karakorams and one of select few to have attempted Mt. Everest. In fact I am the first Pakistani to have tweeted from Camp III of Mt. Everest from a daunting altitude of 7,060m above sea level.
I have been fortunate to have met the Gasherbrums twice in consecutive years and maybe I’ll be third time lucky. In this photo essay I will touch upon the highlights of my experiences, this write up in no way is to be taken as a guide of any sort; it is a tribute to landmarks that I believe stood out during my three expeditions up the Baltoro. 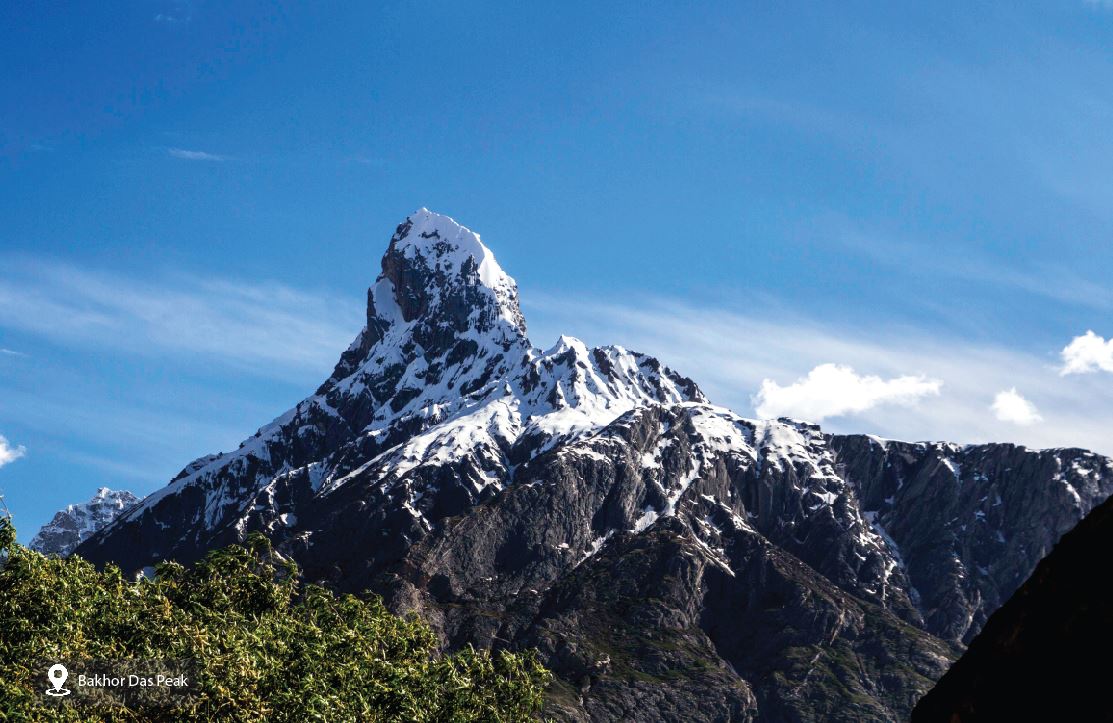 To witness Bakhor Das Peak, which to me resembles Matterhorn, one has to enter the Shigar Valley via the Cold Desert and then rumble and rattle along the never-ending collage of dirt tracks, hanging wooden bridges and tree lined pavilions. We then leave the relative comfort of Askole, the last village at this corner of civilization, and march through a desert like maidan before arriving at the Korophon oasis only to keep trudging on over rugged and perilous terrain, under the brutal sun, before finally arriving at Jhula on the north eastern bank of the Domordo River.
Once beyond Payju campsite the Trangos, the Cathedral and the Lobsang Spire come into view. Some of the best views of the nameless tower can be witnessed from just beyond the eye of the Baltoro Glacier. 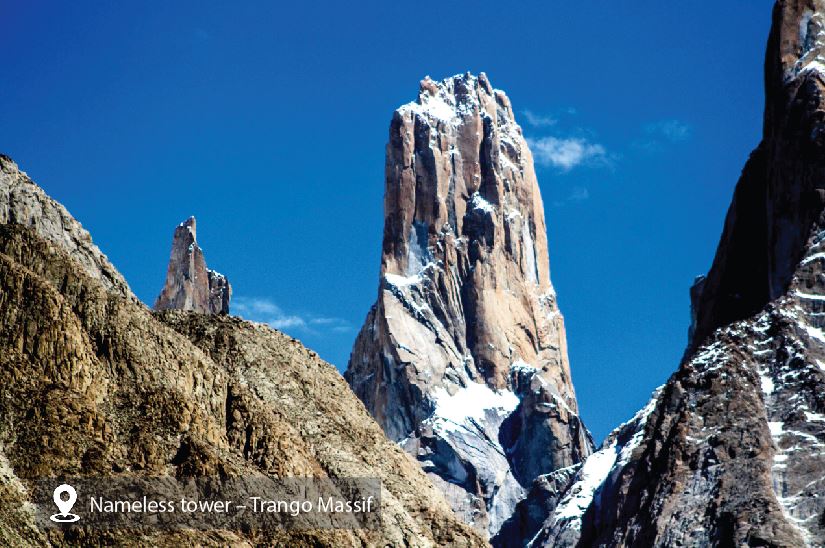 The Trango Towers offer some of the most challenging and one of the longest big wall climb on the planet. Every year a number of expeditions from all corners of the globe visit the Karakoram to test their mettle against these mammoth structures of granite and ice.
Set right across the Trango Massif, at 4,000m above sea level, Urdukas is a terraced campsite perched on a very steep mountainside. It houses massive rock boulders and large patches of green. The terrain over here is as if the wind, the rain and the elements have eaten away the mountainside. Urdukas has a very dramatic disposition and like campsites that precede it, the mood is defined by the change in the angle of the sunlight. 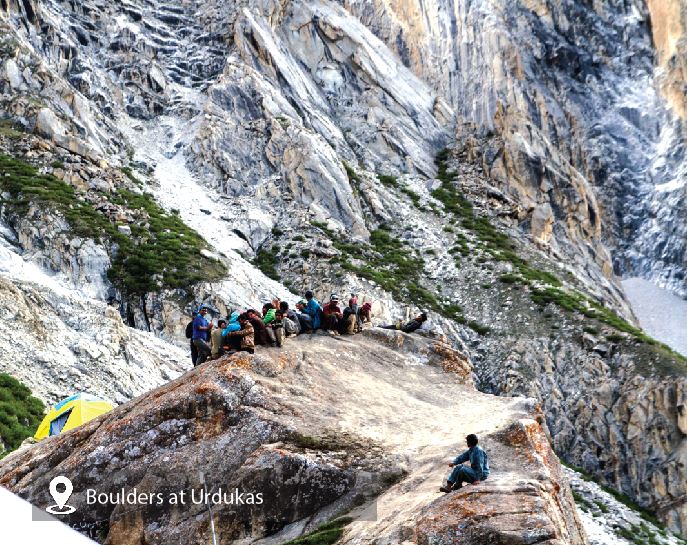 Masherbrum juts into the sky, with an altitude of 7,821m above sea level and a prominence of 2,457m. It is also known as K1, probably because it was the first Karakoram to be mapped. And like a true Karakoram its jaggedness simply sends chills down your spine. My excitement before Goro I at seeing Masherbrum was rather premature because the views I got beyond Goro I were spellbinding.
Concordia is undoubtedly the throne room of the mountain gods. As night fell and the stars came out from behind Mitre Peak, I once more fell in love with Concordia all over again. It took me 3 expeditions spread over 15 years to witness this marvel; never before had I seen K2 this clear.
Gasherbrum-I stands tall over the base camp while Urdu Kangri makes its formidable presence felt on the other side of the valley. The base camp of Gasherbrum is on a singular dry rocky humped band of debris that is sandwiched between icy crevasses and glacial streams. From here the treacherous icefall is visible in its full glory. All the six Gasherbrums share the same base camp. The days are bright and the sun is harsh on most days, whereas, the evenings are quite melancholic for no apparent reason. 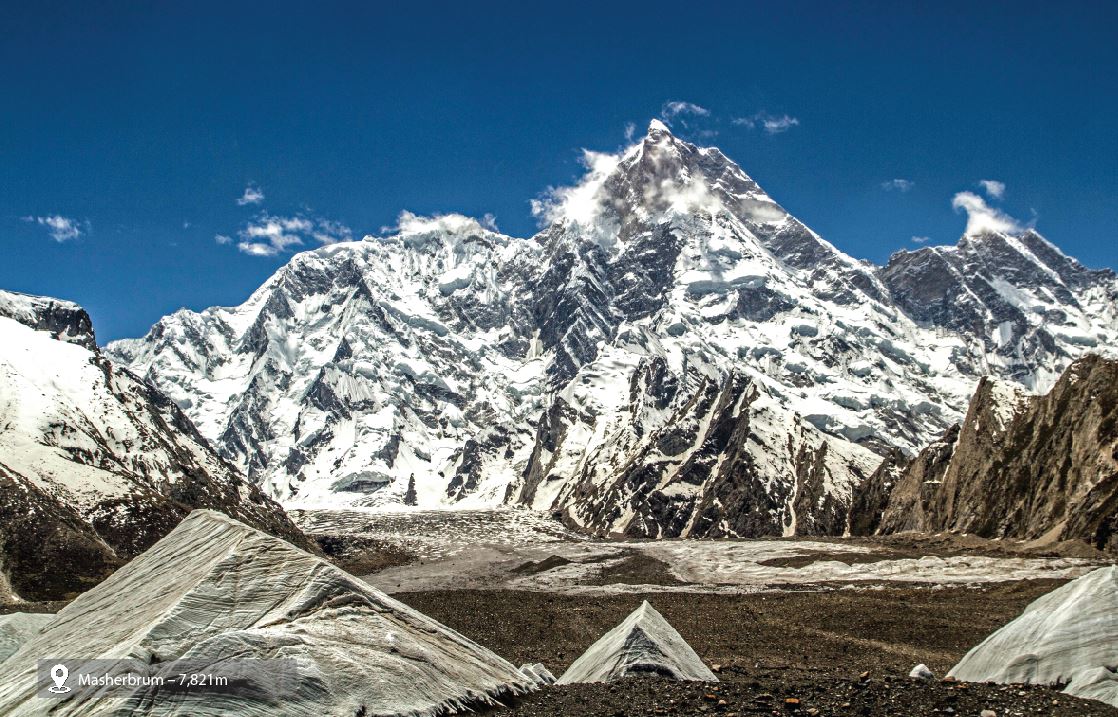 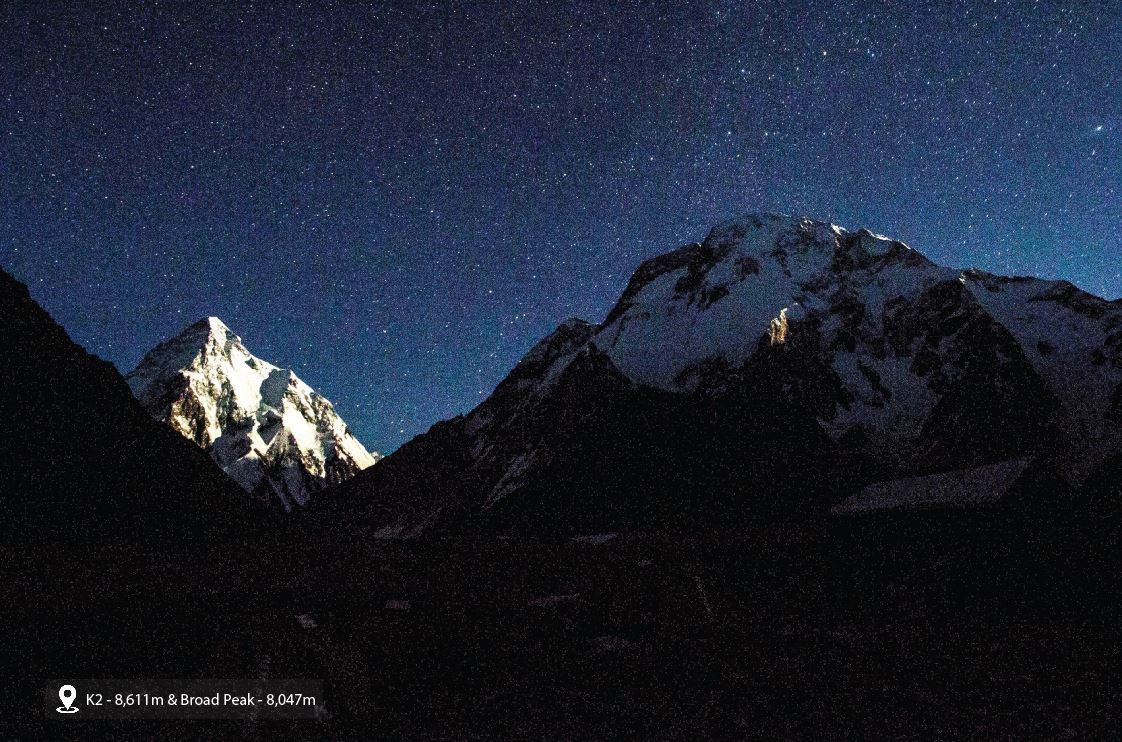 The icefall is like a huge frozen river that cracks up because of the sudden change in gradient resulting into crumbling islands and towers of ice and deadly crevasses that can be hundreds of meters deep. The icefall of the Gasherbrums is comparable to the Khumbu Icefall in Nepal in many ways. The elevation gain is similar and the ordeal of going through steep sections of broken structures of ice is never-ending and nerve-racking. It is nothing less than a twisted labyrinth in which you have got to cheat death every step of the way.

One can’t even indulge in the luxury of listening to music to distract your mind from the beating that your body is taking while negotiating your way through this deadly icefall because situational awareness is of crucial importance for keeping you alive and getting you down safely. 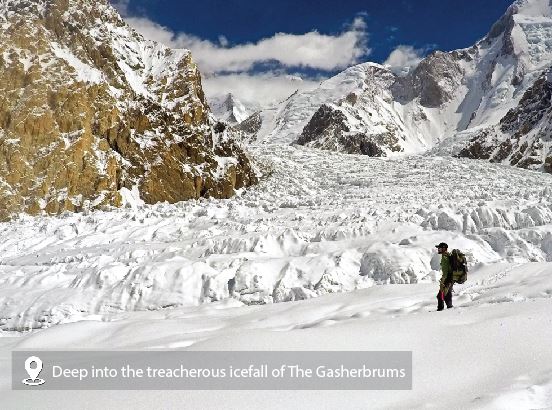 There were portions in the icefall where you could not tell if the ice structure around the crevasse would hold. One had to be super careful but there is a limit to what one can do in such a situation. Venturing alone in this twisted labyrinth of perilously leaning glacial towers and long and pointy hanging icicles is akin to being on a suicide mission and God forbid if your climbing partner, Sherpa or high altitude porter (HAP) is badly fatigued from lugging loads up and down the mountain then it makes no difference if you have their support or are all alone and on your own in the icefall of the Gasherbrums.
Camp I (6,000m) of the Gasherbrums is a very wide snowfield that has large portions of crevasse free areas but every now and then a crack opens up and a new crevasse is born.
By the end of the season most of the soft snow has melted away and all the crevasses open up to their max. In the summer of 2018 I spent 3 consecutive nights here on my second rotation, so much so that the guys at the base camp thought that I had gone missing or worse.
At higher camps your tent is your shelter and your strategic dumping point. In budget expeditions one is forced to look for more affordable options and I am more than glad to report that my locally manufactured tent, which I upgraded by replacing the fiberglass poles with aluminum ones, withstood the elements with surprising tenacity. 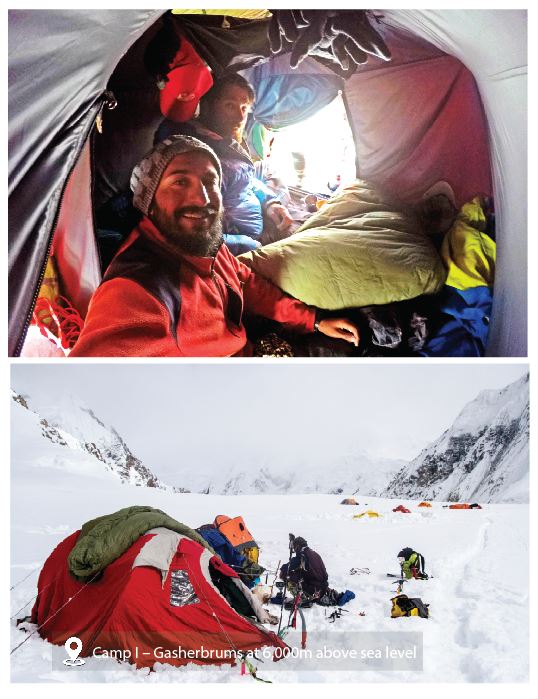 The design of the tent has been inspired by a famous Italian tent manufacturer and had vestibules on both sides for added space.
Gasherbrum-I looks very different from Camp-I and is connected to Gasherbrum-II through a high pass – Gasherbrum La at 6,500m, which is also Camp II of Gasherbrum-I.
The view around Camp-I is out of this world – You can witness two 8000 meter peaks and two 7,900 meter peaks, all of them part of the Gasherbrum family, from the same camp at 6000 meters above sea level.
Gasherbrum-I looks rather doable from multiple routes from Camp-I but it is a long way to the Gasherbrum La (Camp II) through a seemingly never-ending snow field and then a ropeless climb through a tricky icefall to arrive at another snow field under the Japanese Couloir.
In 2018 I was coping surprisingly well with the altitude at 6,500m and was in good spirits but then my HAP became seriously unwell and I got stuck in a snow storm while attempting to climb up to Camp-III of Gasherbrum-I on my own on a previously fixed rope in the middle of the Japanese Couloir.
I might have pushed on through the whiteout if it were not for the life-threatening rock fall that had already forced a climber to return after his helmet cracked open by a falling rock.
In 2019 I was again able to sustain 3 consecutive nights at Camp-I, under the Banana Ridge on G-II but this time it was my first rotation in which I pushed myself to the extreme mainly because on my way up I had found out, to my horror, that the condition of the ice fall had gone from bad to worse. The crevasses were wide open and the route was totally unsafe and although we were roped up to each other but that was hardly any insurance against a serious fall. 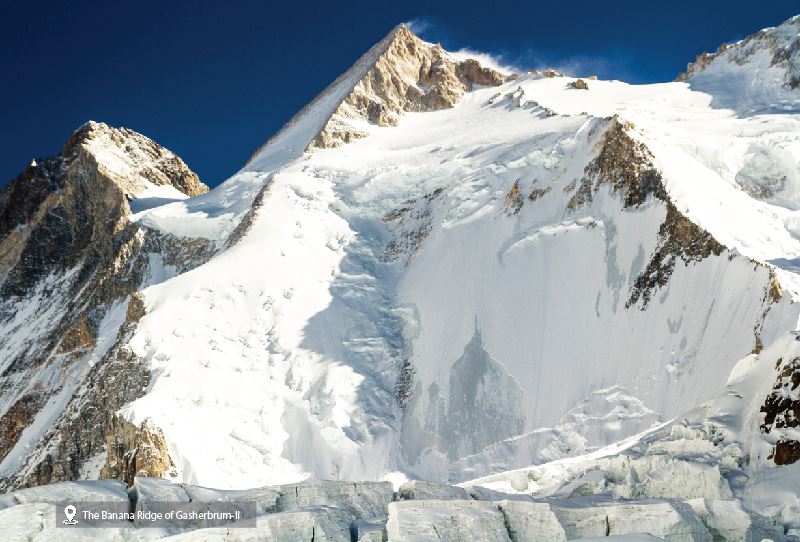 My only regret, if any, at the conclusion of this expedition was the realization of not having done much for the preservation of the fragile ecosystems of these remote and desolate destinations. We as adventurers, explorers, travelers and tourists need to play our part in preservation of these places for our future generations and while we travel alone or with friends and family, we need to strive to minimize our impact on the environment by not polluting and carrying out our trash. Because if you think of it, it is not too hard to take only photographs and leave only footprints.

The writer is a mountaineer and visual storyteller.
E-mail: [email protected]