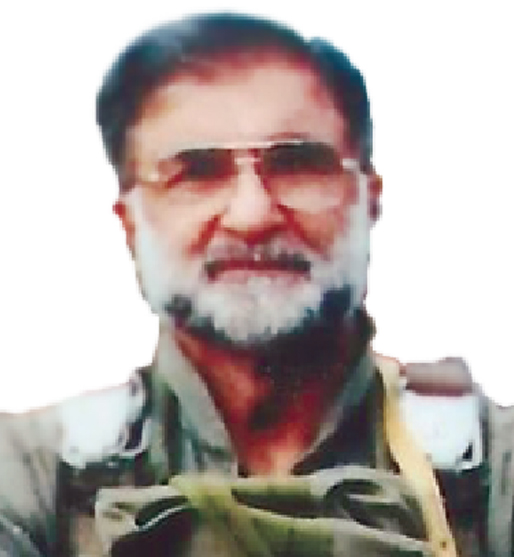 Encounters with the SSG

I admire the easy camaraderie that exists between the officers and men of the SSG, which is a testament to their self-discipline, mutual trust and faith that they have in each other as they go about their highly demanding business. It would not be an over-statement to say that they are truly a band of brothers. By their actions and valorous deeds they indeed live up to their motto: Man janbaz um on a daily basis.

My first encounter with the SSG dates back to the summer of 1959, over half a century ago, when, as a young student of Government College of Engineering, Lahore, I ran into Major Manto and Captain Humayun Malik who had taken an SSG company for mountain training to Upper Swat. Both the officers were from the Armoured Corps, and the latter had been a subaltern in my father's regiment, 6 Lancers, in Peshawar, where I had met him a few times. I was in the area on a mountain climbing expedition with an Italian couple: Dr. Boteri, who was working in a chemical plant in Lyallpur (later to be renamed Faisalabad), and his wife Consuello. We ended up spending a night in the SSG encampment near Kalam on the Ushu Road, where we were entertained to a good chicken curry dinner. (I ran into Brig Humayun when he was DG Pakistan Rangers in 1981/82, and recently talked to him over the phone about a brief history that I wrote about 6 Lancers). SSG had then been raised quite recently at Cherat as a stay-behind force should there be a Soviet incursion in the erstwhile NWFP and further south. Later, when I joined PMA in 1962, I was quite impressed by some of the officers in the Academy who wore the parachutist's brevet on their uniform. They looked very tall, a special breed of men, and I dreamt of the day when I too perhaps might similarly decorate my uniform (The dream was to be fulfilled many years later).

Come 1965 and the war; I was serving with 7FF Regiment as a LAD officer when in December or thereabouts, volunteers for training in the SSG were asked for. Along with the late Captains Javed Aziz and Bilal Rana, I volunteered (both were to lay down their lives in the line of duty not much later: Javed Aziz in drowning accident in the Upper Jhelum Canal in 1969, and Bilal in December 1971 in East Pakistan when his boat was strafed by the IAF at the closing stages of the war in East Pakistan). However, while the two were selected for SSG, I was selected for training as a pilot in Army Aviation, for which I had applied much earlier. In mid-1966 all of us left for our respective courses. One weekend I decided to visit them in Peshawar where the two were under training at the Para Training Wing. There I ran into the OC, Maj Saeed Afzal Durrani, whom I knew from my student days at Lawrence College, Murree although he was some years my senior. Little did I know then that some years later I too would be put through my paces at PTS under the Adventure Training Programme. I went with them for lunch and as a parting gift Javed Aziz gave me his camouflage scarf; which I wore for many winters till it became threadbare. Some time later, while I was in Aviation, Durrani, accompanied by Captain Wasif Vardag, dropped into my room to spend the night. (Vardag and I met many years later at the funeral of General Musharraf’s father. It was attended by a large number of people, since Musharraf held the reins of power. Vardag left me astounded when he quoted a verse from Shakespeare, to the effect, "When beggars die, there are no comets seen; the heavens themselves blaze forth when the death of princes").
Once Major Nisar Ahmad, commonly called Gabby, who was then posted at Attock Fort was going to Muzaffarabad to run a rock-climbing course for 12 Div and asked me to come along for a few days. It was great fun learning rock climbing techniques, especially the thrill of rapelling. Months later in 1968, Bilal and I were detailed for a course at Infantry School, where the newly married Gabby was attending the Staff Course. On Eid day we decided to visit him, only to have a forlorn bride tell us that Gabby had gone to climb Murdar Ghar. Trust Gabby to always do crazy things! 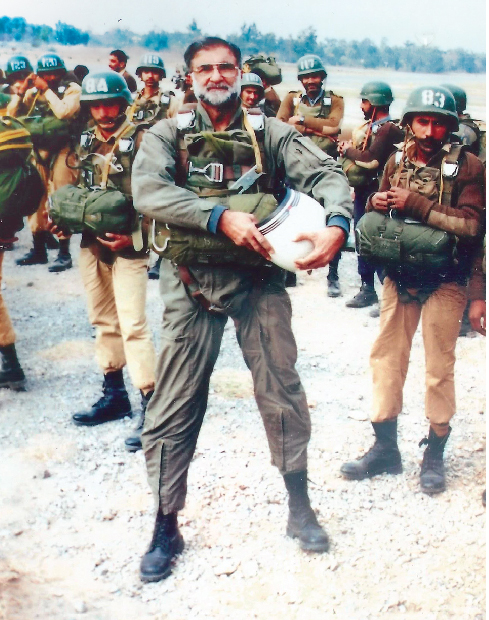 In 1975, I got interested in trying my luck at parachuting and received permission despite being very senior and over-age. I landed up at PTS, only to be RTUed by Major Sultan Amir because I could not do the mandatory six chin-ups. I told him that I would return; I don't think he believed me, but I did a few months later, after putting in concerted effort to shape up. I was by then a Lt Col and sailed through the course which was great fun despite the hard physical regimen. Some months later, while I was posted at Aviation Base at Dhamial, Sultan Amir dropped into my office. He was running a pathfinder course and had come to Dhamial to make a few jumps. He asked me if I would like to jump and after my reply in the affirmative we walked out to an Alouette Helicopter where we chuted up and made a few jumps. On the next day we made a few more jumps from the Mi-8 Helicopter at Fatehjang. On my tenth jump I got over the fear factor and began to really enjoy it. On occasions I would take an L-19 aircraft to Peshawar, make a jump or two, and return home in the evening.

In January 1977, I had gone to Quetta to give some lectures to the Staff College Science Term and went to call on Brig Salim Zia, Comd SSG, who had set up an SSG Tac HQ for the Balochistan operations. Over tea, he asked if I would like to jump and arranged for me to jump at Balelli with Major Tariq Mahmud (T.M) on the next morning owing to my interest. The temperature was freezing cold, but the landing zone was nice and soft. (Brig Zia and I had done our flying course together in 1966/67 and then served together in 1 Army Aviation Squadron. He was an extremely kind and cheerful person who never let rank or age stand between him and us youngsters)

Whenever the opportunity arose I kept jumping until my retirement in 1989 with a total of 32 jumps. Some years went by till I thought it would be fun to jump again. After several aborted efforts, because there was nothing in the rules regarding retired officers’ jumping, I wrote a letter to General Musharraf with whom I had served in 1 Armoured Division as a Captain and later did the War Course at NDC in 1981/82, asking permission to jump with cadets from PMA. That apparently appealed to him, because lo and behold, he gave me permission. In year 2000, 14 years after my last jump, I was able to parachute with the Cadets when I had turned sixty, and made my 43rd jump at the age of 66 years in 2006. I would have jumped again in May 2008, if not for a small glitch in transportation on a C-130. However, when I hoped to do so soon around my 68th birthday in June, a serious heart condition discovered by AFIC put laid to any further parachuting.

Although some people might think that I am crazy, the fact is that I find it great fun to mix and mingle with officers and men of the SSG, besides cadets and young men who have the physical courage to jump out of a perfectly good aircraft just for the thrill of it all. (It is equally, if not more, important to develop moral courage in tomorrow's leaders). I enjoy the inevitable anxiety that builds up as the time to stand up for the jump approaches, to hear the roar of the engines and propellers as the jump doors of the C-130 are opened. I love to feel the cold air and the propeller wash as I stand in the door and see the ground whiz by underneath, a thousand or more feet below. I enjoy seeing the Tee and the jumpmaster giving the order to go. It is thrilling to feel the tug of the chute deploying as I count off to four thousand, and the easy descent before hitting the ground in a minute or so (I have only once strained an ankle when my foot slipped on wet ground while landing, and once hurt my bottom when I hit the platform because of a weak exit on my 40th jump, but never suffered any serious injury, or even a minor one). Above all, although I never had the chance to serve in SSG, or even visit Cherat despite having flown over it numerous times in the course of my Aviation career, I have always admired the thorough professionalism of this elite band of men.

The thoroughness with which the SSG conduct the parachute training, the strict adherence to rules and procedures, etc., ensures that nothing is left to chance. The only injuries I have ever seen is when some jumpers fail to make a proper landing despite the training, but never have I ever seen a parachute failing to deploy fully and properly. Above all, I admire the easy camaraderie that exists between the officers and men of the SSG, which is a testament to their self-discipline, mutual trust and faith that they have in each other as they go about their highly demanding business. It would not be an over-statement to say that they are truly a band of brothers. By their actions and valorous deeds they indeed live up to their motto: Man janbaz um on a daily basis.