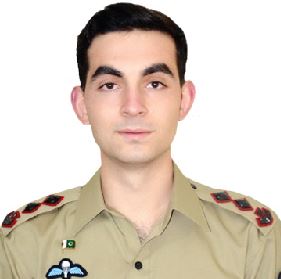 On September 11, 2001 U.S. faced a devastating terrorist attack on its soil. Soon after this attack the U.S. and its allies declared a War against Terrorism in Afghanistan with a declared objective to make the world safe from the scourge of terrorism. The terrorists initially hid themselves in the mountains of Afghanistan but later on, taking advantage of the border conditions, headed towards the tribal belt of Pakistan in search of a safe haven. Pakistan as an ally of U.S played an active role in the War against Terrorism through the efforts of its Army and LEAs. 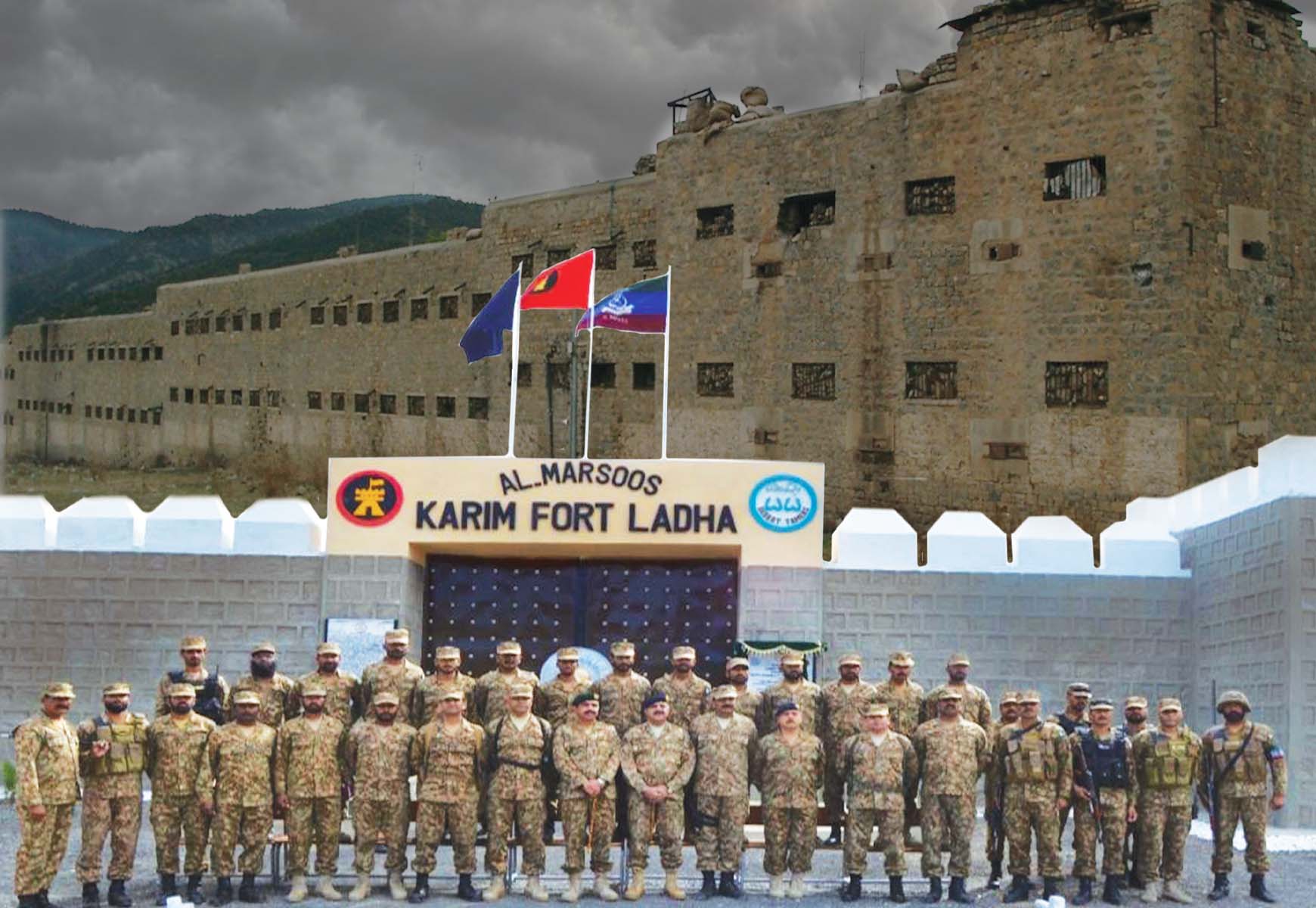 Pakistan Army was able to conduct successful operations in this area and cleanse areas of the tribal belt like Shin Warsak, Azam Warsak, Angoor Adda, Makeen and Ladha, and were successful in denying the use of its tribal belt to foreign terrorists and their local sympathizers for conducting terrorist attacks in the mainland and other countries. 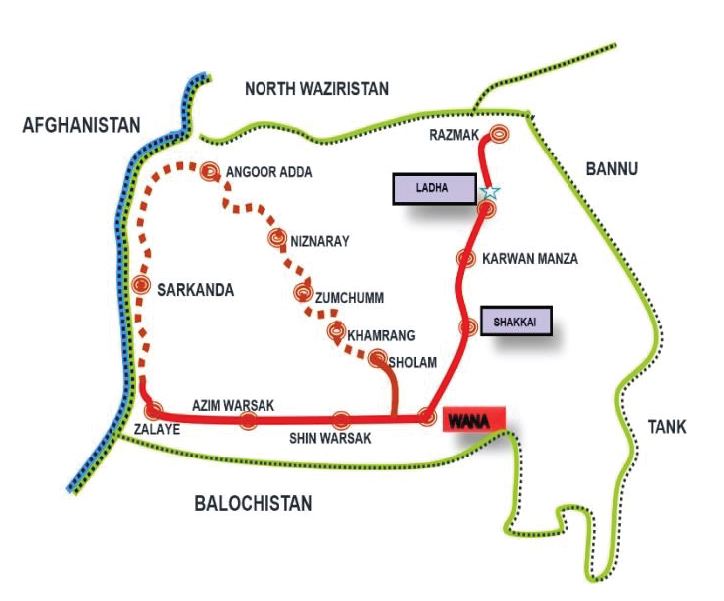 Ladha Operation is also one of these successful operations, conducted by the brave warriors of 1 Wing Dir Scouts. The following narration of the events of Ladha Operation by Col Abdul Kareem (Sitara-e-Basalat) sheds light on the undaunting tale of all those warriors who stood strong in the face of the enemy like an iron wall, despite the challenges of hard terrain, rough weather and unsympathetic environment offered by the enemies of this country. The account of this operation given below has been reproduced as narrated by Col Abdul Kareem (R) to the writer:
The Ladha Fort, now known as Karim Fort, is located in the center of Ladha Valley. In North Waziristan in the direction of the fort at a distance of 1000 meters, a hill with a low height is situated which is known as Banna OP (Observation Post). Eastern side of the road was with FC and the Western side was under Taliban's control.
These miscreants were highly motivated due to being brainwashed, well trained, and physically and mentally ready. They possessed detailed information regarding the terrain, were laying effective ambushes and in addition, running a media campaign in FATA.
Their adopted methodology of attack against us was to physically attack on isolated vulnerable posts. They used to attack on the posts from nearby heights, plant IEDs, lay ambushes on convoys, kidnap/loot the supply vehicles of the civilian contractors, threaten the lives of civilians, acquire advance information about the military move, mislead the locals and carry out suicide attacks.
These attacks were largely launched during hours of darkness and hence reduced visibility. This attack was conducted by a strength of 150-250 individuals. 2-3 firing groups engaged the target from multiple directions by occupying 2-3 nearby heights.
On October 24, 2007 our move for Ladha began. By the grace of Almighty Allah, my convoy reached Ladha without any obstructions despite mountainous terrain, enormous ambush sites and terrorists’ dominance en route. I took along all the necessary weapons, ammo and ration for my stay in that place.
After reaching the location a series of fire raid started. First our transformer blew up, then they threw CDs containing videos of brutal activities of terrorists in front of the fort. But the main attack started when terrorists attacked on January 1, 2008 in the shape of three rockets that were fired simultaneously, targeting my room. I was accompanied by two other individuals at that time. The room nearly filled up with the smell of gun powder and residual smoke, however, by the grace of Allah, all of us were saved. Havildar Aqib Wazir who was in the vicinity suffered minor injury on his right foot and was immediately given first aid. My room, water tank and the ammo mag were deliberately targeted by the miscreants, which thankfully remained unharmed by the grace of Allah Almighty.
Ladha Fort faced 18 physical attacks launched aggressively and each one of them was hit back in a befitting manner. It is not possible to cover details of each attack here, therefore I will cover account of only the vital ones.
The First Attack. The first attack was launched on January 7, 2008. The attack was launched on Banna OP and Fort simultaneously. It was a layered attack and miscreants carried out the assault in files, one after another. The attack also incorporated suicide attackers who would precede the physical attack. They would approach the walls with the aim to blow it and create holes in it. It was daytime and my snipers efficiently engaged these suicidal attackers. Once this didn’t work, the other method devised by these suicidal attackers was to sneak in, while hiding in the folds and cuttings of nullah and get close to the Fort’s wall without being seen by the snipers. I earmarked the best marksmen as snipers at each side of the Fort, with the explicit instructions to shoot the suicide attackers without fail. The miscreants kept pounding in but were efficiently engaged, as a result, their files started falling one after the other. This attack continued until 0700 hours the next day but drastically failed. Not a single casualty occurred on our side by the grace of Almighty Allah whereas they suffered massive casualties. 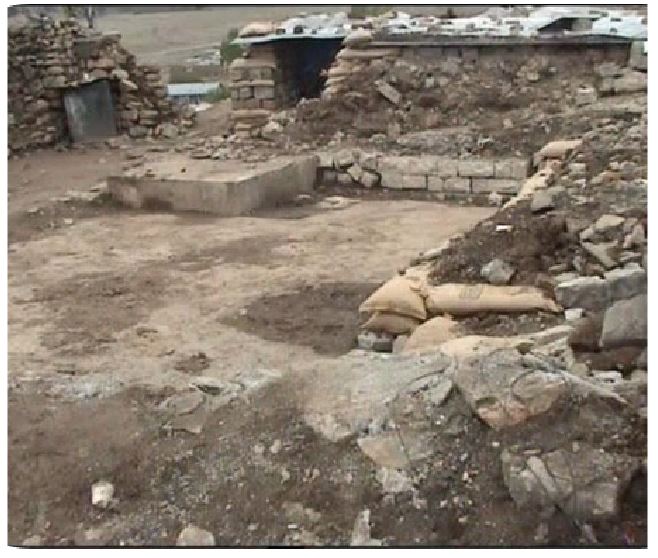 The Second Attack – January 9, 2008. The second attack was launched within a day’s gap at about 0040 hours. The attack was preceded by intense firing on the Fort and OP simultaneously. The miscreants were desperate by that time to capture Banna OP and blow up the Fort’s walls to have some gap, which could serve as an entry point to the Fort. Although, they had succeeded to create certain gaps through recoilless rifles and SPG 9 fire, but those gaps were immediately covered by autos for the time being, and subsequently closed with sand bags. Once again, the miscreants faced fierce retaliation and suffered heavy causalities. This second attack, again by the grace of Almighty, failed.
The Third Attack – January 13, 2008. After a four-day’s gap, the third attack was launched on January 13, 2008 at about 2330 hours. Every successive attack launched by miscreants was more severe than the previous one. By then the miscreants had also deployed snipers who were very accurate. These snipers were well hidden, who would carry out sniping throughout the day. From our side, artillery fire from Shakai and Landai Noor gun positions was also available by that time. The targets were registered and communicated to Div Arty 9 Div. The utmost effort of miscreants entailed the capture of Banna OP but the brilliant pushback given by the soldiers always compelled them to retreat. In this attack, miscreants reportedly suffered over 40 casualties. By the grace of Almighty Allah, we did not have any casualties.
The Fourth Attack – January 16, 2008. It was very cold, and the situation further aggravated due to heavy snow, the miscreants launched attack simultaneously on Fort and OP at about 1830 hours. Again, the attack was repelled very well, inflicting approximately 34 casualties on miscreants, whereas none were caused to us.
The Fifth Attack – January 17, 2008. The miscreants could not succeed in capturing Banna OP and Ladha Fort, so they attacked Sararogha, Chagmalai and Siplatoi Forts. Initial success in capturing Sararogha Fort gave a lead to TBs and encouraged them to attack the rest of the forts as well and unfortunately, the other two also fell to them subsequently. Capture of these three forts by terrorists naturally had demoralizing effects on troops in Ladha who were trapped and surrounded by terrorists. Moreover, a common propaganda technique used by miscreants was to send a message on Motorola, on the same frequency we used. A common threat announced by the terrorists was that soon the fort will fall and everyone will be slaughtered brutally. But my comrades were motivated and encouraged to fight against the enemy, and fight they did. Owing to the shortage of manpower I asked for reinforcement as well which was badly required, but due to the blockade it could not be materialized.
Sixth to Seventeenth Attack – January 18-February 11, 2008. The miscreants integrated locals as well in the attack on the plea of collateral damage due to artillery shelling. The remaining attacks, therefore, were fiercer and heavier in nature. The long-awaited reinforcement arranged through aviation helicopter landed on Ladha helipad. It was a 3 minutes touch and go landing in which one Medical Officer, one Capt and 18 Soldiers ex 61 Punjab Regiment were disembarked. All these attacks were beaten back in a befitting manner by the brave sons with requisite zeal and fervor. Their services were beyond the call of duty. On January 24, 2008, air support was provided as well as reinforcement comprising one officer (Artillery observer), one JCO and ten soldiers from 61 Punjab Regiment transported through helicopter. 6 casualties and the bodies of 10 martyrs were dispatched to Peshawar through the same helicopter. The miscreants’ resolve was nearly shattered by our resilience.
Last Assault. The last assault was launched on February 13, 2008 at about 2200 hours, which was yet again responded by us fervently. This time the response by us was so severe that it silenced the enemy’s guns and they were compelled to bend on their knees and at dawn, the inhabitants of Ladha raised white flags, heaved up almost on every house. A jirga comprising notables and elders of the area arranged for a peace agreement. After that no attack came on our position. A kind of ceasefire was completely observed with effect from February 15, 2008. On February 16, 2008, Headquarters South Waziristan Scouts (HQ SWS) sent all the necessary items through a helicopter which were demanded by us. These included medicine and ration items. On February 16, 2008, six out of twenty captured prisoners were handed over to the jirga as a gesture of goodwill. The battle was over on a high note where we were able to defend our Fort despite numerous fierce attacks by Taliban. I, along with my companions, bow our head in front of Allah Almighty for such a respectable accomplishment of this heavy responsibility.
The intense battle of Ladha continued from January 1-February 13, 2008 during which 18 physical attacks and numerous fire raids were launched against Ladha Fort. It was the steadfastness and the sheer valor of the sons of the soil that led us to our success. By the grace of Allah, we never gave up and compelled the Taliban to abandon their attacks. In the process all those who embraced shahadat with their dedication, courage and devotion to duty would never be forgotten. May Allah give us the courage to keep the flag of this country fluttering high (Ameen).
Pakistan Army zindabad, Pakistan Army paindabad!