One of the most interesting aspects of Chinese culture is that it has retained its values and hierarchy system inherited from Confucius philosophy and it is deeply rooted in Chinese culture and civilization even today. Due to this profound impact on Chinese society, they take care of many things while addressing people such as age, gender, work place, social status, position/rank etc.

While the names of Chinese people begin with family name, the other part of the Chinese name is the given name which is usually composed of one or two characters. An example of a full Chinese name is: Family Name + Given Name. Zhāng + Lí huā

As we know Chinese language is a non alphabetic language, its earlier forms were pictographs of concrete objects or phenomena such as sun, moon, fire, water, wood, plants, field, sky, nail, person, male, female etc. The simple concepts were communicated through pictures but as time passed there emerged the need to express more abstract and complicated ideas as the pictures were not able to serve the purpose of communication anymore. Therefore, Chinese people developed the system of representing ideas and concepts through characters. The characters which are being used today are the simplified forms and made up of character components called radicals. It is very interesting that the same concept is reflected in the names of Chinese men and women, e.g. generally Chinese females have the radicals related to flower (艹), female (女) or jade (王) in their names whereas the names of males have the radicals related to tree (木), person (亻), etc.

The most commonly used gender specific titles “Sir” and “Madam” are represented by “先生 xiān shēng” (Mr.) and “女士 nǚ shì” (Ms.) respectively. Chinese women marital status is indicated by using terms nǚshì or tàitài. In Chinese society, addressing people by their professional title at workplace environment is considered polite and conveys respect. Usually the title follows the family name, for example the word for teacher is “lǎo shī” and if you want to call a teacher, the family name comes first and then lǎo shī, e.g. wáng lǎo shī, lǐ lǎo shī. Some of the titles including lǎo shī is gender neutral and is used for both males and females. Similarly the word for General Manager is zǒng jīnglǐ, e.g. wáng zǒng jīnglǐ or wáng zǒng (jīnglǐ can be omitted).

Note: *The words containing dotted u (u) vowel are difficult to pronounce as this sound (u) doesn’t exist in Urdu and English e.g. nu, lu

*Chinese language makes frequent use of measure words to indicate the quantity of a noun. 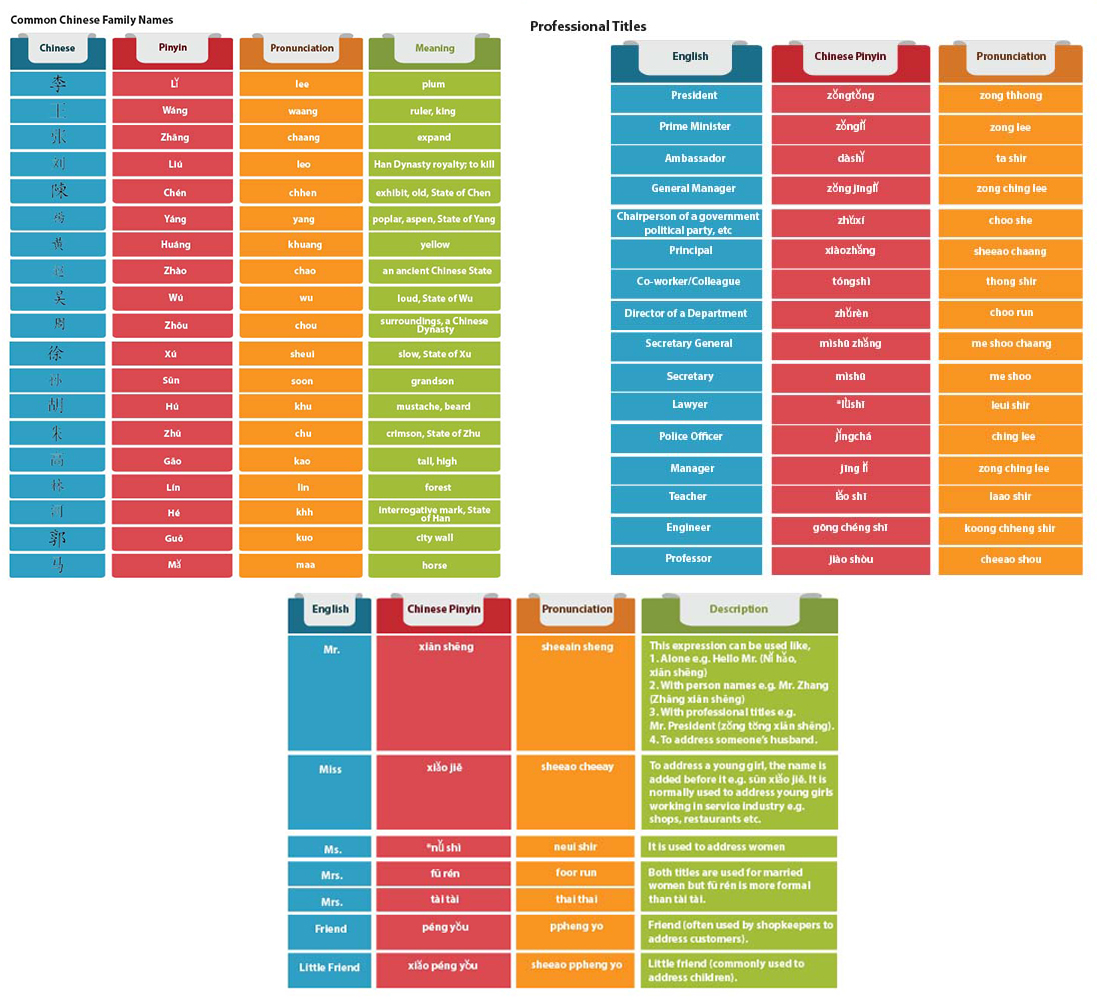