COP26: The Future of Climate Change or More of the Same

Climate Change requires thorough international efforts as seen through the formulation of Glasgow Climate Pact brought forth at the United Nations Climate Change Conference, although Pakistan has achieved tremendously at the national level through tree plantation drives and preservation acts under the current government. 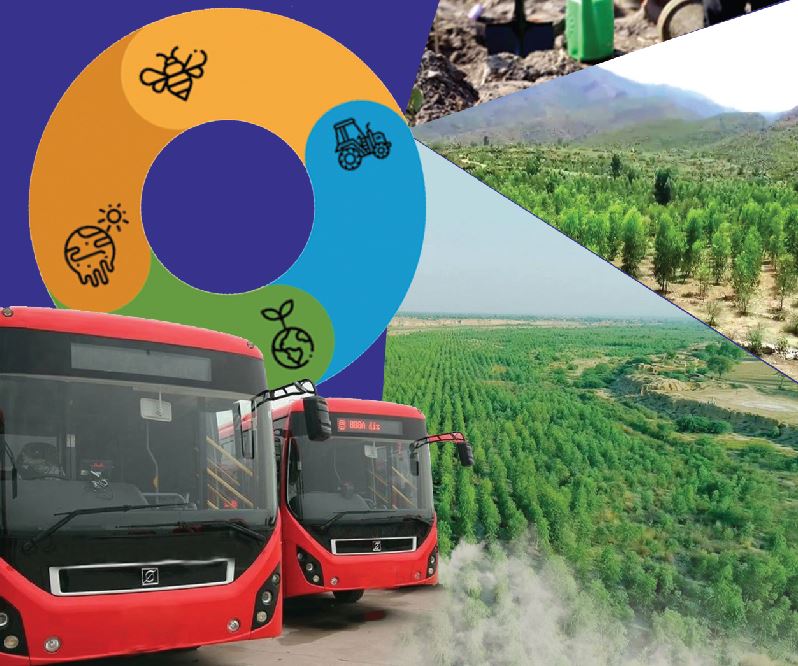 The United Nations Climate Change Conference (COP26) is over. World leaders, delegations from various governments, United Nations, business leaders, civil society and media descended on Glasgow in November, many coming straight on from the G20 Summit in Rome, to discuss the catastrophic risks posed by climate change. Hopes and expectations were both high and unrealistic.
Pakistan, re-elected as the Vice-President of COP26 and as a member of six important committees, was an active participant at COP26 and a positive contributor to the debate. The delegation was led by the Prime Minister’s Special Advisor on Climate Change, Malik Amin Aslam, joined by Minister of State for Climate Change, Zartaj Gul Wazir, along with other leading climate experts, participated in numerous meetings and side events to highlight Pakistan as a high priority for climate support.
So, what did COP26 set out to achieve? Countries were asked for their plans to cut emissions by 2030.The stated goals were: to secure global net zero by mid-century and keep the goal of 1.5 degrees in global warming within reach; adapt to protect communities and natural habitats; mobilise climate finance; and work together to deliver.
Notably, the targets agreed at COP21 in Paris in 2015 for countries to reach by 2020, including emissions reductions, have not been met. Much has also been made of the failure of rich countries to put up the $100 billion a year they promised in 2009 to support developing countries address climate change. While it is difficult to define exactly what has been financially committed and utilized since 2009, recent reports indicate that the target will not be reached until at least 2023. It is unlikely to be enough. The withdrawal from the Paris Agreement by the U.S. after Donald Trump won the U.S. Presidency was a setback as was the onset of the Coronavirus pandemic, soaking up trillions of dollars from the global economy. Can we expect any difference following the COP26 to meet the commitments made? Time will tell.
Climate change is such a diverse topic that it is considerably easy amongst all the complex reports, agreements, jargon and acronyms, to lose sight of what are the dangers to every country on the planet. According to the United Nations, the increasing threat of global warming presents a catastrophe for human beings and all other forms of life on earth: hotter temperatures; more severe storms; increased drought; warming, rising oceans; loss of species; not enough food; more health risks; as well as poverty and displacement. It will take decades to reverse the damage and loss and require innovative and substantial financing and commitment.
After two weeks of speeches, lobbying and intense negotiations, the Glasgow Climate Pact was signed after undergoing several re-drafts and some last-minute interventions by coal producing countries. While some experts hail the Glasgow Climate Pact as a step in the right direction, opinion is divided and many most affected developing countries, including Pakistan, hold concerns whether it will achieve the steps needed to hold back and reverse the impacts.
The ‘hot’ climate change topic focuses on the catastrophic impact caused by fossil fuels – one of the key drivers of global warming. Astoundingly, until COP26, coal and fossil fuel subsidies (almost $6 trillion globally) have never been explicitly mentioned in the 26 years of treaties and decisions at UN climate talks. Coal-producing nations and the global fossil fuel lobby are powerful and have a vested interest in delaying action. Although many fossil fuel companies are now starting to also invest in clean energy alternatives, significant resistance to moving to net zero in the coming decades remains. In a recent positive step, many banks and global investment funds have committed to shifting their funds away from supporting fossil fuel projects and instead investing in clean energy and technologies. Community activism with large climate protests in many countries; media and social media campaigns and shareholder activism, have all played a role in drawing investor attention to the need to do this.
In a surprise announcement on the second last day of COP26 negotiations, China and the U.S. – the world's two biggest CO2 emitters – announced they have agreed to boost climate cooperation over the next decade. The two countries pledged to ‘recall their firm commitment to work together’ to achieve the 1.5C temperature goal set out in the 2015 Paris Agreement and called for stepped-up efforts to close the significant gap remaining in achieving the target. Given the intense rivalry between these two global powers on many issues, this was a significant moment of cooperation.
In the closing days of COP26, UN Secretary-General, Antonio Guterres said, “This is the most important battle of my life, and I will not give up.” He said, “we can and must win the fight against the climate crisis.” Secretary-General Guterres continued saying, “We must end fossil fuel subsidies. Phase out coal. Put a price on carbon. Protect vulnerable communities. And make good on the $100 billion climate finance commitment to support developing countries.”

Pakistan, re-elected as the Vice-President of COP 26 and as a member of six important committees, was an active participant at COP 26 and a positive contributor to the debate. 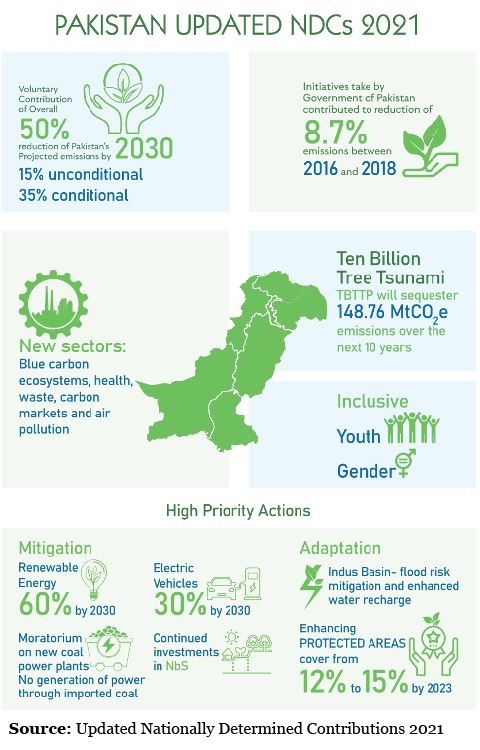 But moments before the outcome was adopted, India intervened to propose a significantly diluted version of the language on coal, changing to ‘phasing down’ of coal instead of ‘phasing out.’ Despite several countries expressing their anger at the last-ditch move by India, the weaker text was officially adopted. A visibly emotional and frustrated COP26 President, Alok Sharma, said he was ‘deeply sorry’ for the way the final minutes unfolded. The outcome is reflected in paragraph 36 of the Glasgow Climate Pact which ‘Calls upon Parties to accelerate the development, deployment and dissemination of technologies, and the adoption of policies, to transition towards low-emission energy systems, including by rapidly scaling up the deployment of clean power generation and energy efficiency measures, including accelerating efforts towards the phase-down of unabated coal power and inefficient fossil fuel subsidies recognizing the need for a support towards a just transition.’ (‘Unabated coal power’ refers to the use of coal that isn't mitigated with technologies to reduce the CO2 emissions. A ‘just transition’ refers to the need to transition millions of workers whose jobs would disappear in the shift from fossil fuel industries to new careers.)
This is hardly more than a polite request but at least it made it into the agreement at all. It is not binding and means at least another 40 or 50 years – maybe longer – of fossil fuels polluting the environment by which time, the world will be a very unhealthy place.
Speaking in response to the optimistic comments by U.S. Climate Envoy, John Kerry, about the slow process of reaching an agreement in Glasgow and his support for activists pushing leaders to do more, Pakistan’s Special Advisor, Malik Amin Aslam, was quoted in The Washington Post praising Kerry’s passion but saying, “The average age of decision-makers is 60. We’re talking about 2060, 2070 targets and none of these guys are going to be around. The people affected are the ones out on the streets. They’re the ones whose lives are at stake.” The New York Times also reported his comments in their updates on the negotiations. He is absolutely right. Those making – or not making – the decisions today will not be around to deal with the mess they have left behind.
It is well known that Pakistan is one of the ten top countries affected by climate change. We only need to look around us to see how the environment is being heavily polluted and degraded. Recognising the need for action, Pakistan has been participating in climate conferences and negotiations for over a decade. In preparation for COP26, Pakistan’s comprehensive submission of its Updated Nationally Determined Contributions (NDC) under the Paris Agreement was prepared.1
Pakistan’s NDCs set an ambitious target of 50% overall reduction of projected greenhouse gas emissions by 2030. While some might challenge the ability to achieve these targets, it shows the seriousness with which climate change is being addressed and the realisation, based on experience and predictions, of what awaits should action not be taken.

To reach the target, Pakistan aims to shift to 60% renewable energy and 30% electric vehicles by 2030 with a complete ban on imported coal. The country seeks to expand nature-based solutions through the implementation of The Billion Tree Tsunami Programme, Recharge Pakistan, and the Protective Areas Initiative.

According to the NDC submission, Pakistan’s climate goals are focused on the current climate-induced vulnerabilities and aimed at reducing poverty and ensuring the stability of the economy. Pakistan intends to set a cumulative ambitious conditional target of overall 50% reduction of its projected emissions by 2030, with 15% from the country’s own resources and 35% subjected to the provisions of international grant finance that would require $101 billion just for energy transition. However, as has become clear, climate financing pledges by richer countries to support developing nations have not been forthcoming so it begs the question, ‘where can Pakistan find that funding?’ It will require sustained advocacy and determination to engage with global funders to ensure Pakistan is at a high priority for consideration.
To reach the target, Pakistan aims to shift to 60% renewable energy and 30% electric vehicles by 2030 with a complete ban on imported coal. The country seeks to expand nature-based solutions (NbS) through the implementation of The Billion Tree Tsunami Programme (TBTTP), Recharge Pakistan, and the Protective Areas Initiative (PAI).

“I call on all nations to follow the example of Imran Khan who has pledged to plant 10 billion trees in Pakistan alone. And we in the developed world must recognise our obligation to help.”

The writer is an Australian Disaster Management and Post-Conflict Reconstruction & Rehabilitation Advisor who lives in Islamabad. She consults for the government and UN agencies and has previously worked at both ERRA and NDMA.
E-mail: [email protected]

1. It is well worth reading in full on http://www.mocc.gov.pk/SiteImage/Misc/files/PakistanUpdatedNDC2021-compressed.pdf