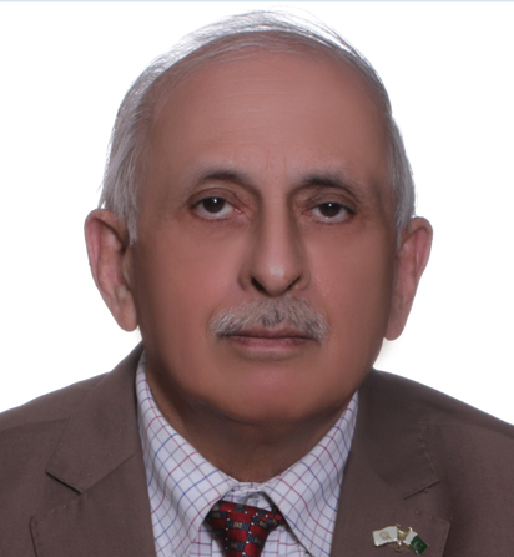 Wetlands are a unique eco-system which are mostly covered by water, either fresh or salt. Wetlands are rich in vegetation, predominantly of the aquatic variety which adapts to and flourishes in their unique environment. Wetlands play a number of very important functions in the environment which include: water storage, processing of carbon and various other important nutrients, purification of water, controlling the ingress of salt water, and support a very diverse range of plants and animals. Wetlands are considered the most biologically diverse kind of ecosystem which play an important role in slowing the effects of global climate change. Wetlands occur naturally all over the world and are also created artificially to reap their positive benefits. The main types of wetlands include swamps, bogs, marshes, mangroves, and flood plains, etc. 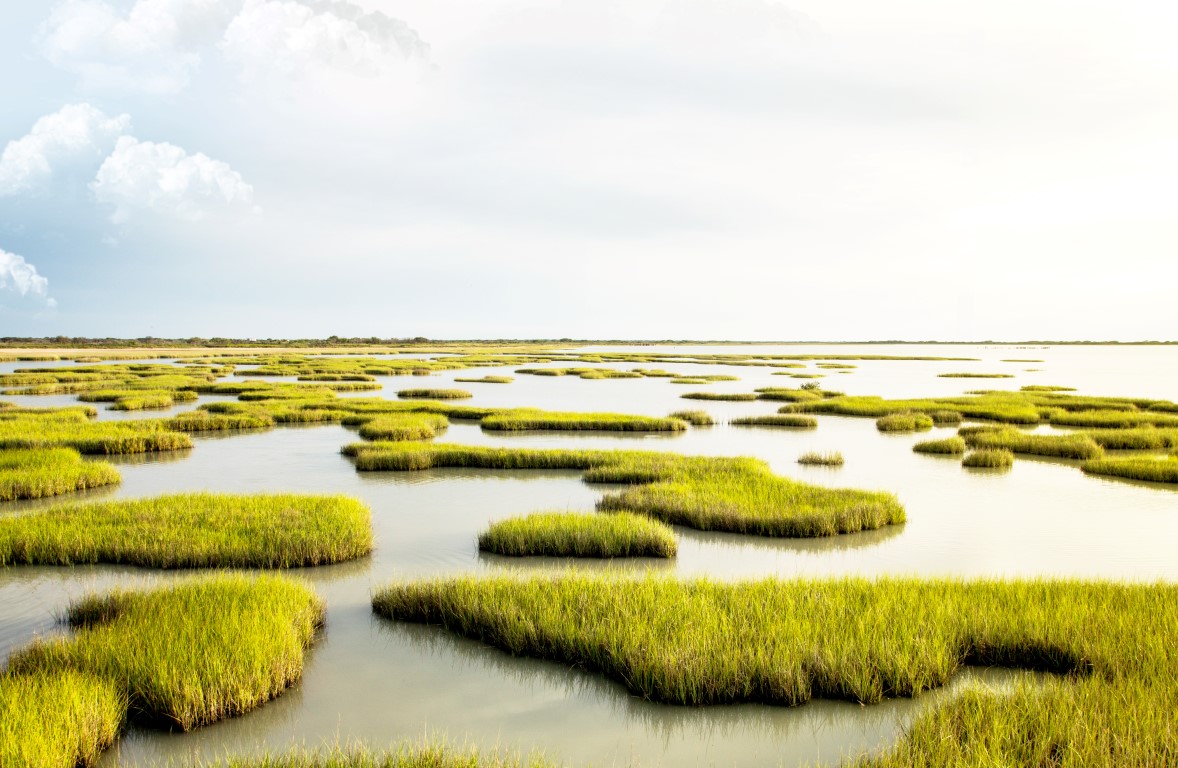 Globally wetlands were deemed important in the 1960s after a vast number of wetlands were reclaimed which led to the decline in water bird population. Over a period of many years the text and language of an international convention to protect wetlands was discussed in detail. It was not until 1971 that it was ready to be signed. An international conference was held by Iran’s Fish & Wildlife Department at Ramsar, Iran. During the course of this conference the final language of the convention was agreed upon as the Ramsar Convention on Wetlands of International Importance, especially as Waterfowl Habitat and the convention was signed by 18 nations in attendance. Over the years, the convention has only been amended twice, in 1982 and 1987 respectively. To recognise the signing of this convention, globally 2nd February of every year is observed as World Wetlands Day. 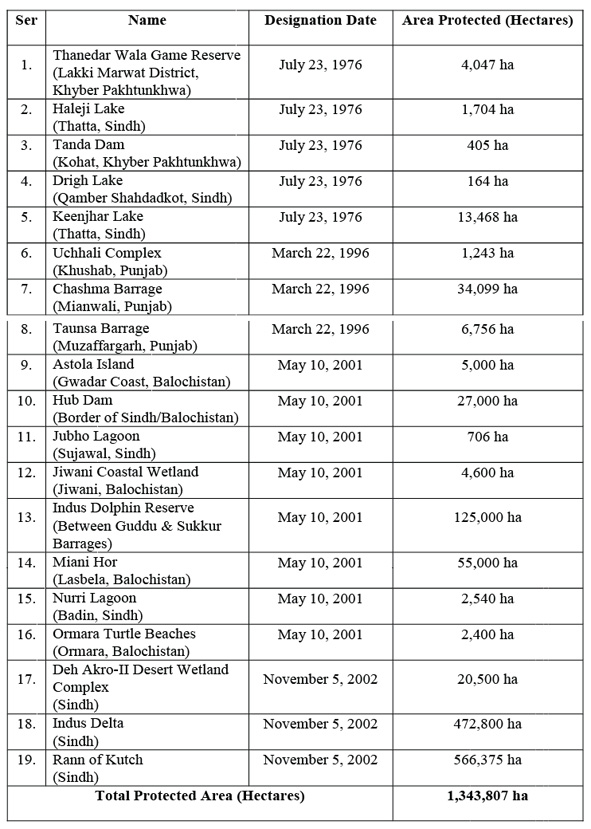 Globally the convention came into force on December 21, 1975 with Australia being the first country to ratify and enforce it, however, Pakistan became the twelfth country worldwide to ratify and enforce this treaty on November 23, 1976. Currently this convention is endorsed by 90% of countries recognised by the United Nations globally, and it ensures protection of 2,335 wetlands worldwide covering a total surface area of 249,613,278 hectares of wetland (as of January 2019). Furthermore, Pakistan has the distinction of hosting the very first Asian Regional Ramsar Conference at Karachi, Sindh in 1991.
Pakistan itself has only 225 wetlands of significance with many other smaller, insignificant wetland areas having a total covered area of approximately 9,189,090 hectares. Out of these, 46 of them have protected status, by either being designated as national parks, wildlife sanctuaries or game reserves. The country has been blessed with the following types of wetland areas: glaciers, alpine lakes, peatlands, rivers, lowland lakes, swamps, bogs, dams, reservoirs, barrages, irrigation canals, drainage canals, urban wetlands, marshes, mangroves, estuaries, beaches and coral reefs.  Our wetlands are located throughout the entire expanse of the country. These are categorised into four unique zones: Northwest Alpine Wetlands, Salt Range Wetlands, Central Indus Wetlands and Makran Coast Wetlands. Between 1976 and 2002 Pakistan has designated 19 wetlands throughout the country to be protected and recognised under the Ramsar Convention on Wetlands of International Importance, especially as Waterfowl Habitat. A detailed list of the Ramsar Convention listed wetlands are as below:
Turning Waterlogged Areas into Wetlands
Thirty-eight percent of land in Punjab and Sindh is affected by waterlogging out of which fourteen percent is affected by salinity. Every year we spend millions of rupees trying to control waterlogging and removal of various salts from areas to produce wheat, rice and sugarcane with little to no productive results.
Waterlogging takes place mostly in low-lying flood prone areas where soil porosity is very low or non-existent. Rain/flood waters are unable to deeply penetrate into the soil. This mainly occurs due to the soil composition which tends to be either clay, silt-clay or clay-loam. Water which is actually absorbed during rainfall lies between 1 to 2 metres below the ground. Different methods are used to pump water out of the area with heavy costs.
With proper planning, most of our heavy saturated/waterlogged areas can be converted into wetlands area. Those areas where salinity is high can be demarcated and plants which are suitable for the high saline content can be planted, such as mangroves, etc. These inland high salinity wetlands can also be further developed into highly productive salt water lakes.
Those waterlogged areas where the water content is not very saline and stands knee or waist deep can be developed as floating hydroponic beds for use by farmers to grow various types of fruits and vegetables which they might not ordinarily be able to grow. These floats are anchored to their position and can be moved as and when needed.
Waterlogged areas of Districts in Punjab and Sindh can be divided into two types, non-saline and saline, which respectively decide their type, wetland or mangrove area. There are more than twenty types of plants that we can plant in wet soil type of wetlands. These aquatic plants help filter water and reduce pollution, improve both ground surface and underground water reservoirs by acting as a giant, natural sponge.
The Indus River Basin Irrigation System has an average annual water flow of 142 million-acre feet, out of which approximately 104 million acre-feet are used annually for irrigation purposes. The amount of water which flows through the River Indus is twice that of River Nile and three times as much as the Rivers Tigris and Euphrates combined.
While we build dams to help produce cheap electricity through hydropower generation and create large water reservoirs for various forms of consumption, we forget to develop natural forms of protection along our river banks. Planting trees, shrubs and all forms of greenery which are suitable for our local environment, will help promote a cleaner and green Pakistan.
Pakistan’s total wetland area cover is only approximately 9.7% which is below the average requirement of 18.6%. It’s high time we make use of our water resources to develop lakes, ponds and wetlands along the Indus, which would greatly benefit the country. Development of wetlands and their supporting forested areas can be done by public-private joint venture cooperation, keeping in mind our commitment to the Ramsar Convention and other international obligations.
Pakistan can benefit immensely from the conservation and further development of its wetlands and their supporting forested areas. The benefit would be both environmental, economic and would help contribute towards fighting the adverse changes of global climate change. There are, however, many challenges which must be faced to accomplish this goal, and need to be approached in a logical and holistic manner to ensure the future sustainable development of Pakistan.

The writer is member of the Advisory Board at the Center for Global and Strategic Studies (CGSS).
E-mail: [email protected]