Meetings Held with the Civil and Naval Leadership, Naval Facilities Reviewed
Chief of the Naval Staff (CNS) Admiral Zafar Mahmood Abbasi went to Malaysia on an official visit where he called on Chief of Royal Malaysian Navy and Malaysia’s Defence Minister.

Upon arrival at the Ministry of Defence in Kuala Lumpur, CNS was received by Chief of Royal Malaysian Navy Admiral Tan Sri Mohd Reza Bin Mohd Sany. A ceremonial guard of honour was presented to the CNS at the occasion. During the meeting with his Malaysian counterpart, various matters of mutual interest, bilateral naval collaboration and avenues to enhance interoperability between Pakistan Navy and the Royal Malaysian Navy were discussed. CNS also highlighted Pakistan Navy’s commitment and efforts for ensuring maritime security in the region, including Pakistan Navy’s initiative of Regional Maritime Security Patrols (RMSP). He also thanked Admiral Tan Sri Mohd for participation of Malaysian Navy in Multinational Maritime Exercise AMAN-19 hosted by Pakistan Navy in Karachi earlier this year. 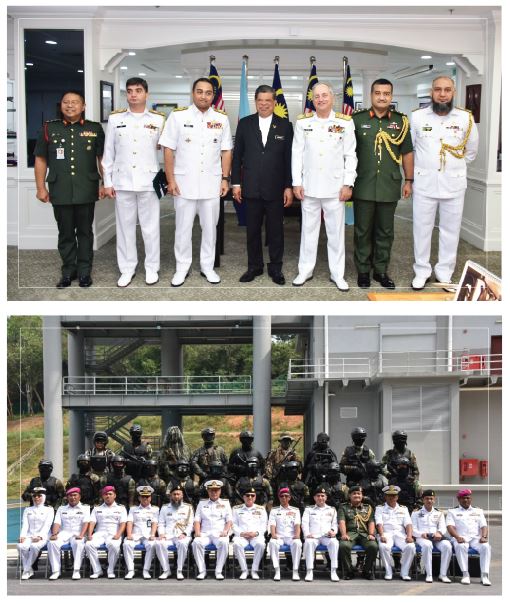 Malaysian Naval Chief, while acknowledging the significance of strong bilateral naval association between the two navies, appreciated Pakistan Navy’s efforts and commitment in support of collaborative maritime security in the region and successful conduct of Exercise AMAN-19. Both dignitaries agreed to further enhance mutual interaction in diverse fields through port calls, bilateral naval exercises and training exchange programmes. A brief was also given to the CNS on the roles and tasks of Royal Malaysian Navy.
Later, CNS also called on Malaysia’s Defence Minister, Mr. Mohamad Sabu. Mr. Sabu acknowledged and highly appreciated the role and contributions of Pakistan in spearheading various initiatives for maintaining peace and stability in the region. Both the dignitaries agreed on further enhancing the bilateral cooperation in the domains of military collaboration.
During the visit, the CNS also visited various facilities of Malaysian Navy including Headquarters Western Fleet, Special Force Training Centre, Boustead Naval Shipyard, Malaysian Naval Air Arm and called on Commander Western Fleet and other Field Commanders.
Upon his arrival at Headquarters Western Fleet in Lumut, the Admiral was warmly received by Royal Malaysian Navy Western Fleet Commander, Vice Admiral Dato’ Aris Adi Tan Bin Abdullah. A guard of honour was presented to the CNS at the occasion. While there, he was briefed on the roles and tasks of Western Fleet Command. CNS also visited Special Force Training Centre and Naval Education & Training Command, and called on heads of these institutes. CNS then witnessed the facilities at the Centres, and appreciated the quality of training.
Later, he visited Boustead Naval Shipyard in Lumut where upon his arrival he was received by head of the shipyard and was given a detailed briefing on the facilities at the shipyard. Thereafter, the CNS visited various sections of the yard and appreciated the quality of work being undertaken. He also visited Headquarters Malaysian Naval Air Arm where he reviewed the Quarters Guard and various facilities at the HQ Naval Air Arm.
It is expected that this visit of Chief of the Naval Staff would greatly augment the bilateral cooperation between both the countries in general and the two navies in particular.