The world has been amassing the deadliest weapons for the better part of a century now. These include everything from conventional weapons to chemical, biological, nuclear and thermonuclear, and even space weapons. It seems that all states – small and global powers – have been occupied with arming themselves with the latest and technologically advanced weapons to secure themselves. However, the onset of the novel Coronavirus (COVID-19) pandemic that has engulfed the entire globe has brought into question the conventional notions of security. It has affected all states; small or large, developed or underdeveloped. The sheer effect of the pandemic is just unfolding. As of now more than 11 million people have been infected globally in at least 188 countries, areas and/or territories with 531,806 deaths. The economic effect of social distancing is immense – airlines have been affected and so have trade and commerce, the entertainment and service industries have suffered from closures; millions have lost their jobs as a result. It could cost the global economy trillions of dollars. It has affected the financial, political, economic, social, and psychological structure of world. The way it has brought the world to a halt is unprecedented in modern history. In many ways it is more potent than any nuclear weapon.  Does it mean that the weapons the world has been amassing for the last century are redundant? Or is there the possibility of more effective weapons i.e., biological weapons? Are they the ultimate weapon?
There have been a number of narratives going around that hint at COVID-19 as a biological weapon that has been deliberately developed and disseminated. It ranges from the U.S. accusing China of deliberately spreading it, to China accusing the U.S. of deliberate spread in Wuhan, as well as it being a plot by UK, U.S. and Israel. At the moment both China and U.S. seem to be embroiled in a war of narratives regarding the virus. U.S. President Donald Trump insists on calling it the “Wuhan Virus” or “Chinese Virus.” It would be very difficult to determine whether there is any truth in the conspiracy theories going around or not. But there is no evidence so far that the pandemic was man-made and deliberately spread. However, tensions between U.S. and China have risen to an unprecedented level. This is unfortunate, especially at a time when big powers and the whole world need to be cooperating to contain and defeat COVID-19. However, this does bring the issue into focus that if a pathogen can be developed, disseminated and controlled at will, it would be the ultimate weapon.
What are biological weapons? The World Health Organization defines it as microorganisms such as virus, bacteria, fungi and toxins that are produced and disseminated on purpose to cause death and disease in humans, animal and plants.1 There are some that occur naturally and others that are developed intentionally as tools of warfare. There are a number of known pathogens that can be used deliberately to cause death and disease including agents like anthrax, botulinum toxin, plague, cholera, Ebola and smallpox, just to name a few. Methods of dissemination range from contaminating food and water supplies through aerosols methods or by releasing infected vectors like flies and mosquitos.
Many states developed biological weapons programmes over the years. Several European countries developed bioweapons in the early part of the 20th century. Germany used bioweapons in First World War and Japan in the Second World War. U.S. and the Soviet Union had extensive biological weapons programmes during the Cold War, so did the United Kingdom. However, they gave up their biological weapons programmes in 1960s and 1970s. This paved the way to the conclusion of the Biological and Toxin Weapons Convention (BTWC) in 1972, which bans the development, production, acquisition, stockpiling and retention of biological and toxin agents for weapons purposes. It complements the 1925 Geneva Protocol, which prohibits the first use of biological and chemical weapons. Today BTWC has 183 signatories and 109 ratifications including India and Pakistan, but fears remain of clandestine programmes because they are relatively cheap to produce and easy to hide. Also, the BWTC has no standing organization or effective verifications mechanisms.
While most of these countries have formally given up biological weapons, many retain large biodefence programmes. U.S. has one of the largest biodefence programmes. There is a fine line between offensive and defensive programmes which essentially comes down to intent. So defensive research in U.S. and other countries can also be used for offensive purposes. Secrecy surrounding biodefense programmes create suspicions that they may, in essence, be offensive in nature. Also, great advances in biotechnology and genetic engineering mean that there is potential for misuse of the technology to create infectious viruses that are resistant to medicines or create weapons that only target certain genes and races.
Thus, in practice if COVID-19 was indeed a biological weapon it would be very difficult to detect and attribute blame to. Also, this means that pathogens have been developed as weapons in the past and there may still be state-sponsored secret programmes that exist in the world today. 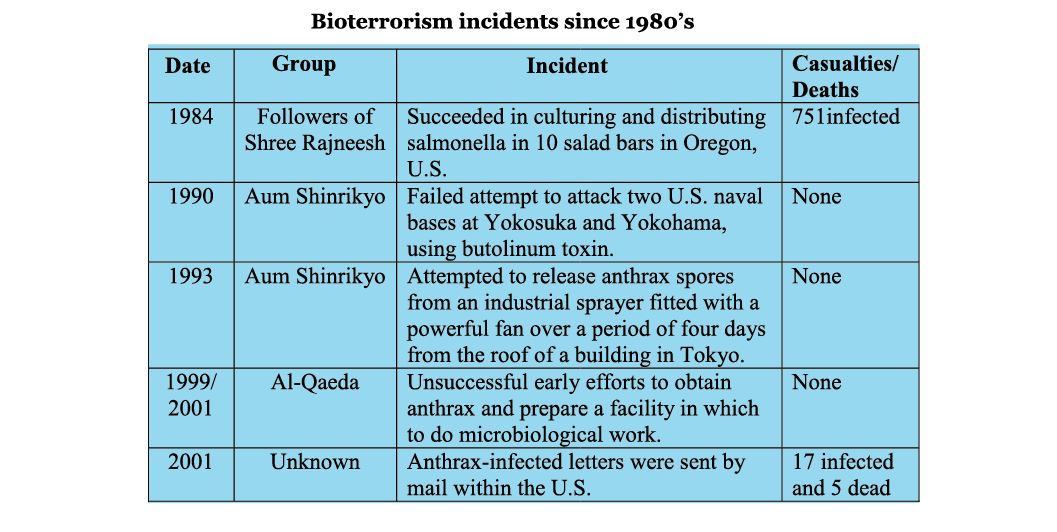 This also means that the potential for bioterrorism is also there. Biological weapons or pathogens can be dangerous weapons in the hands of terrorists because they are relatively easy to acquire, have the potential to cause mass casualties, and have a long-term effect in terms of diseases and after-effects. Moreover, the use of biological agents is more difficult to detect. At the same time, terrorist as non-state actors are unlikely to have the expertise and financial resources to weaponize pathogens and mount large-scale bioterror attacks. They are more likely to pose a threat in the form of small-scale attacks like the anthrax attacks in the U.S. post-9/11.
At the moment the most pressing biological threat is the pandemic the world faces. The question on everyone’s mind is how are COVID-19 pandemic and other possible outbreaks in future likely to impact the security structure around the world.
How are pandemics likely to affect global and regional security dynamics? At the global level traditional rivalries and threat perceptions would not disappear. Major powers like U.S. and Russia and perhaps China already have arms races going in conventional, nuclear and space realms. This will endure for the foreseeable future. In fact, we are seeing an escalation of tension among great powers, especially U.S. and China. However, states are now likely to invest heavily in biowarfare and biodefence research to defend and safeguard against future pathogens that may be disseminated as agents of warfare. Given the immense and widespread effects of the COVID-19 pandemic, it will have a profound effect on how states view security in the future. Military industrial complexes may perhaps be replaced by “medical industrial complexes” with investment in R&D against vaccines for potential pandemics. Overall, biological weapons would take priority in any future offensive or defensive strategic calculus.
At the regional level, India and Pakistan need to get out of their traditional security mindset and pursue a cooperative approach for a region that is plagued by poverty, underdevelopment, and a poor health system. A cooperative approach to handling the pandemic is vital.  If the region does not mitigate and contain the pandemic it could potentially see 7.5 million deaths over the next few months. A region that is already poor would also have acute social and economic fallout of the lockdown. When South Asia recovers from the pandemic, it would need to invest all its resources in development, strengthening the health systems, mitigating poverty and tackling food and water insecurity. The region would need to prepare for future pandemics as well. Thus, India and Pakistan need to work on mitigating tensions, including on core issues like Kashmir and Siachen.
However, it is unfortunate that India continues aggression against Pakistan and its neighbours. It has been indulging in cross-border firing across the Line of Control, coercion against Nepal and is embroiled in a conflict with China in Ladakh.  It is, thus, unlikely that the dynamics of South Asia will change for the foreseeable future where India has hegemonic designs and ambitions of becoming a great power. Basic security structures and deterrence postures will remain the same. It is unfortunate that India continues on the path to aggression and coercion at a time when cooperation is most needed to deal with this pandemic and any future ones.
Biological weapons are very much part of the global security threat landscape. In fact, they have been called the poor man’s atomic bomb because they are relatively easy to develop and disseminate, and these offensive programmes are easy to hide. Many countries are suspected of keeping clandestine programmes, others maintain large biodefence programmes that have the potential to be used for offensive purposes. Since the programmes exist, the potential for their use also exists – by both state and non-state actors. While it is highly unlikely that the present COVID-19 pandemic was deliberately spread, the potential and capabilities to cause pandemics and disease as acts of war exist across the world, the threat of bioweapons in future cannot be ruled out. Thus, what the world does not need is more investment in weapons of mass destruction. It does not need abrogation of existing arms control agreements. The world needs to realise the changing nature of threats to the humanity. World powers need to invest less in destructive weapons and more on arms control arrangements. Most of all, the world needs to focus on how to prevent and fight pandemics like COVID-19. It appears that the biggest threat to humanity may come from biological agents – whether man-made or natural. Thus, there is a need to strengthen international law regimes that regulate offensive uses of biological agents. There is a need to develop transparent and stringent verification mechanisms for the existing BTWC. The world may need to reassess its security paradigm from traditional security to human security, and from state security to global security.

The writer is a Research Fellow at the Institute of Strategic Studies, Islamabad and focuses on nuclear and arms control & disarmament issues.
E-mail: [email protected]