Jahman is a sleepy, little village on the Indo-Pak border, about 10 km upstream of Bedian along the BRB link canal. In 1965 it was even smaller, with only a few brick houses. The population comprised barely a couple of hundred souls. The bridge on the BRB opposite the village was insignificant too, fit to take light traffic only. This bridge later earned some mention in the war diaries of the sub-unit that stoically stood in its defence in September 1965. But it was more than a quarter century later in 1991 that Jahman Bridge and the ‘battle of the bridge’ really came out of obscurity. The battle owes its recognition to a revelation by a senior Indian commander in his account of the 1965 War. More of it a little later.
‘C’ company 15 FF (Reconnaissance and Support) was tasked to cover the gap between 10 and 11 Division. A platoon under Naib Subedar (N/Sub) Yusuf, had already been detached to reinforce defences in Ganda Singh Wala Sector. It was a wide gap, stretching over 6 km, from north of Bedian to just south of Burj, near Barki. It was sensitive enough so that a breakthrough could lead the enemy straight on to Lahore, turning the defences of both 10 and 11 Division and forcing them to fight on reverse fronts. Defending a vast frontage such as this, much beyond the outfit’s physical capability, was an uphill task. To crown it all, it had no dedicated artillery support. The company commander took up the daunting task and deployed his company (less a platoon) – some 80-odd bodies – along the BRB covering all major approaches towards Lahore. Jahman Bridge being the vital ground in his area of responsibility, the company commander decided to hold it in strength (See map below). 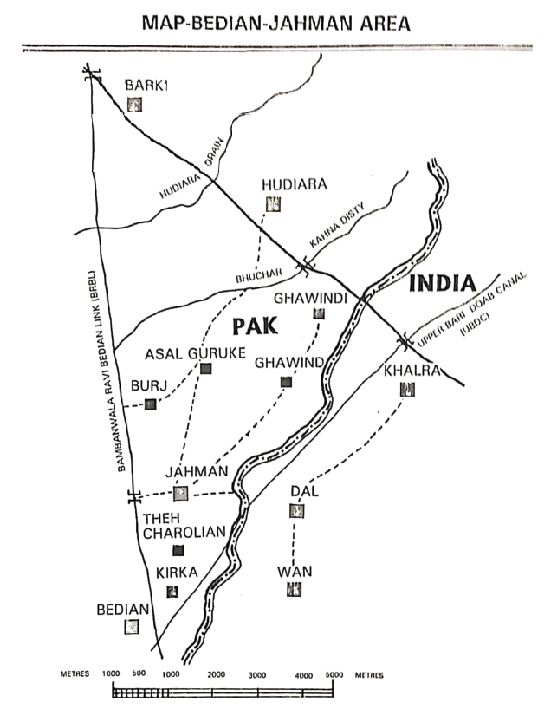 On 6th September, when the war broke out, ‘C’ company was well poised to meet any eventuality. Heavy shelling and attacks along axes Wan-Bedian and Khalra-Barki had made the enemy’s intentions clear. The Jahman area served as a common, open flank to both the prongs of Indian 7 Infantry Division and, hence, some enemy penetration in the area was imminent. Enemy continued to strafe and shell the positions along the BRB intermittently but no major event took place up to September 8 except patrol clashes wherein the Piffers had the better of the enemy. Hudiara and Barki in the north, however, were witnessing one of the fiercest battles of the war and a spillover was soon expected to Jahman area. And then dropped the bombshell!
A New Assignment
On September 8, the company commander was called to Brigade Headquarters for a conference. He felt relieved for he would be able to press for reversion of N/Sub Yusuf’s platoon, now that he faced a two-pronged threat. He would also request for patrolling of the area east of the BRB by 1 EB Regiment, his company being organically unsuited for the job.
It had been a prolonged conference; the company commander rejoining his company late in the evening. He was in a hurry, and could hardly hide his anger. The conference had been a disaster, as far as he was concerned. None of his requests — reversion of his third platoon, foot-patrolling by 1 EB or dedicated artillery support — had been accepted. On the contrary, he had been assigned an additional task — an unusual one at that! He called his ‘orders’ group and gave out brief orders. The company was to re-group into foot infantry, leave its recoilless rifles (RRs), transport and heavy baggage behind and launch attacks on villages Theh Charolian and Kirka, flushing the enemy that had intruded there out of the border (see map) — and all this to be done that very night (8th/9th September); operation commencing 2000 hours. He barely had three hours to prepare and set off for the task. He ended the shortest orders of his career cryptically, “I shall not entertain any questions”. The rear party comprising heavy baggage, vehicles and RRs under Sub Muhammad Sadiq, the company senior JCO would stay behind. However, the party — drivers, cooks and non-combatant administrative personnel — 30 in all — were to ‘deploy’ along the BRB. He left Sadiq in no doubt as to his mission, “You will defend Jahman Bridge — last man, last round — until the company returns”.
The company departed on its ‘flushing operation’ on time and, after clashes with enemy patrols, secured the two objectives and established itself along the UBDC inside Pak border by 0230 hours (See map). The company commander’s ordeal was not yet over. Having accomplished his additional mission and much to his chagrin, he received fresh orders from the Brigade Headquarters to remain deployed in present position in support of 1 EB, and prevent enemy penetration towards Bedian from northeast. He felt like drowning himself in UBDC. This operation, lasting up to September 13, merits separate treatment, but we will leave it here and revert to the Jahman Bridge — the subject of our story.
Sub Sadiq re-deployed his ‘troops’ astride Jahman Bridge; all the drivers manning an RR each under Havildar Fateh Khan in the middle, cooks on one flank and dhobis (laundrymen) and sweepers on the other. Sadiq sited his ‘command post’ right on the bridge. He even earmarked a ‘task force’ under Havildar Mir Samand to be prepared to launch a counter-attack and retake the bridge on orders. 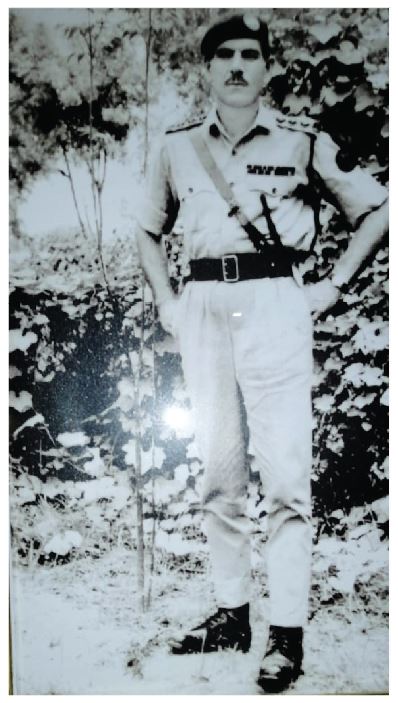 Havildar Fateh Khan and Sepoy Abdul Rahman (Shaheed) were decorated with Tamgha-i-Jurat, the latter posthumously. Sepoy Ayub Khan earned an Imtiazi Sanad. Sub Sadiq was cited for Sitara-i-Jurat but unfortunately did not receive one. His reward — recognition by the enemy — is unparalleled.
Sub Muhammad Sadiq rose to be Subedar Major of two Piffer battalions successively and retired as an Honorary Captain to his Village Lehri, Tehsil Kahuta, District Rawalpindi.
After a protracted struggle by his senior unit officers Hon. Captain Sadiq was invited to GHQ on August 25, 2006 and on behalf of the COAS, was given a cash award of Rs. 2 lakhs by the Adjutant General. On October 18, 2018 at the age of 94, Sadiq departed to his eternal abode and was buried in his village Lehri, Tehsil Kahuta.
May he rest in peace. Inna lillahe wa inna ilaihe rajeoon.

The writer is a former CI, NDC, DG ISPR and former ambassador to the UAE for over three years. He was honoured with High Order of Independence by His Highness the late Sheikh Zayed Bin Sultan Al Nahyan.
E-mail: [email protected]