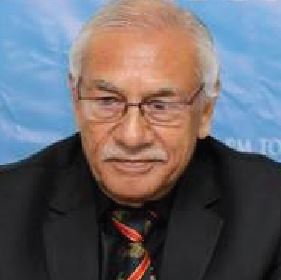 Few individuals significantly alter the course of history. Fewer still modify the map of the world. Hardly anyone can be credited with creating a nation-state. Mohammad Ali Jinnah did all three. 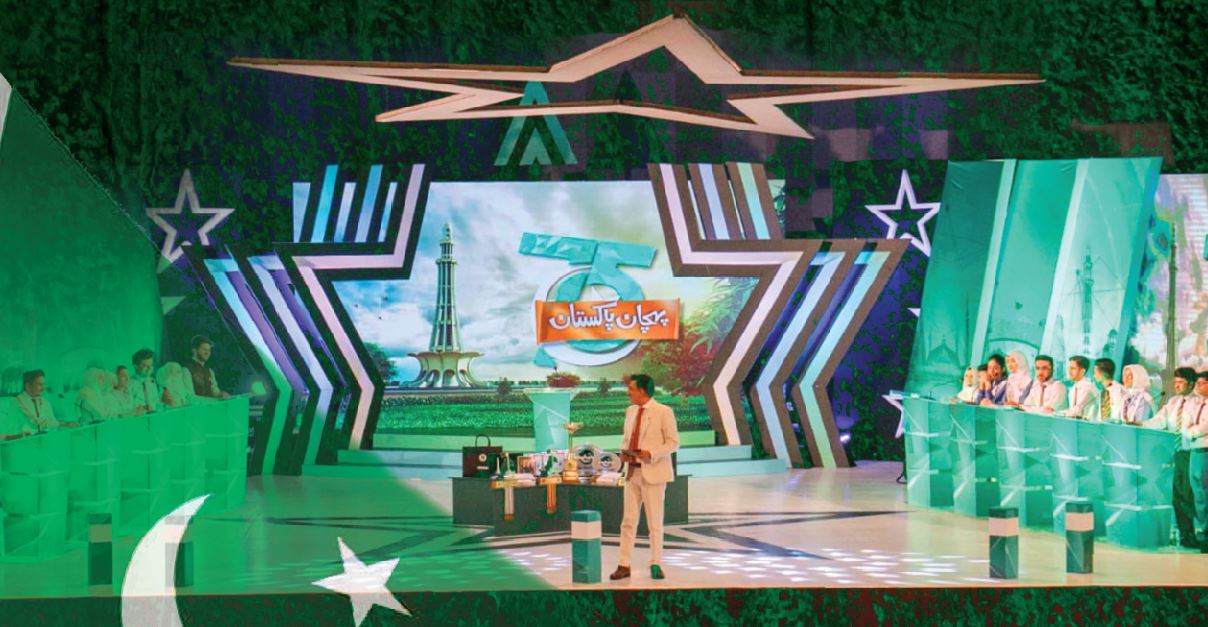 Pakistan became independent 75 years ago after waging decades of peaceful jihad for its freedom. This struggle was brought to an efficacious conclusion by our great leader, Mohammad Ali Jinnah, revered as Quaid-i-Azam.
The commemoration of 75 years of Pakistan’s independence was an important milestone in the history of our beloved nation. It therefore became all the more prudent for the elders to create awareness among our current generation about the relevance and importance of this great historic moment, the journey for which began much earlier than August 14, 1947. However, this landmark date became the pinnacle of the freedom struggle for a separate homeland for the Muslims of India.
To keep the importance of this day fresh in the minds of all Pakistanis, especially the younger generation, Inter Services Public Relations (ISPR) planned and organised a nationwide competition, to be participated in by the youth of Pakistan. The programme was called “Pehchan Pakistan Quiz Competition (Diamond Jubilee Special)-2022”. This competition was the continuation of the successful Pehchan Pakistan Quiz Shows held in 2020 and 2021. “Pehchan Pakistan-2022” was organized by ISPR in collaboration with Pakistan Television Network (PTV) and Ministry of Information and Broadcasting (MOI&B). This year, being the Diamond Jubilee special show, the syllabus was enhanced and research scholars of Pakistan Studies from renowned universities of Islamabad/Rawalpindi were added in the format. The venue of the event was Pak-China Friendship Centre (PCFC) Auditorium, Islamabad, to accommodate a larger audience. Following are the highlights of the show:
Syllabus. The syllabus was based on:
▪ Pakistan Movement: New Dimensions.
▪ Struggles and Creation of Pakistan Movement (Compilation: 1857-1947).
▪ Pictorial Journey of Pakistan Movement (1857-1947).
The preparation for this quiz programme was very thoughtfully and painstakingly undertaken by ISPR and PTV. ISPR had taken the help of two eminent historians, Dr. Riaz Ahmed and myself for the preparation of the essential information which was sent to different schools and colleges all over Pakistan, from which the children were expected to prepare for this competition. This had the desired effect, because the college and school children nationwide were able to grasp the salient aspects of Pakistan’s history and the names of all the leaders of Pakistan Movement, therefore getting to know the relevance and importance of this important milestone of our history.
Participants. The highest academic achievers of Class 10th/O Level (session 2021-22) participated from all parts of the city as well as 6 regional teams [from 4 provinces, Azad Jammu and Kashmir (AJK) and Gilgit-Baltistan (GB)], Federal Board, Federal Government Educational Institutions (FGEI), Pakistan Private Schools Association and Army Public School and College System (APSACS).
Date of Recording/Telecast. What better day to choose than August 14, 2022. The finals of this competition were organised and recorded on August 12, 2022 at Pak-China Cultural Centre at Shakarparian, Islamabad, jointly by PTV and ISPR. This recording was aired live on August 14, 2022 at 6.30 pm by PTV.
Jury/Judges
For adjudication of this event, a panel of judges/jury was constituted comprising eminent scholars and historians and included the following:
Jury
▪  Prof. Dr. Riaz Ahmad
▪  Col. Azam Qadri (Retired)
Judges
▪  Prof. Dr. Syed Wiqar Ali Shah
NUML (Chairman, Pakistan Studies Department)
▪  Dr. Abid Hussain Abbasi
NUML (Assistant Professor, Pakistan Studies and History)
▪  Marium Asif
Quaid-i-Azam University (Pakistan Studies Lecturer)
▪  Dr. Sahira Abbasi
UET Taxila (Assistant Professor)
▪  Dr. Sabahat Jaleel
Quaid-i-Azam University (Assistant Professor, History & Pakistan Studies)
▪  Dr. Razia Sultana
Quaid-i-Azam University (Professor, Department of History)
▪  Salma Raheem
NUML (Pakistan Studies Lecturer)
▪   Col Azam Qadri (R)
Military historian and biographer
▪   Prof. Dr. Riaz Ahmad
Ex-Director, National Institute of Historical and Cultural Research, and Professor at Quaid-i-Azam Chair (NIPS), Quaid-i-Azam University
▪   Dr. Mujeeb Ahmed
International Islamic University (Associate Professor/Chairman Department of History and Pakistan Studies)
▪   Dr. Zameer Hussain Khan
Quaid-i-Azam University (Assistant Professor, Department of History) 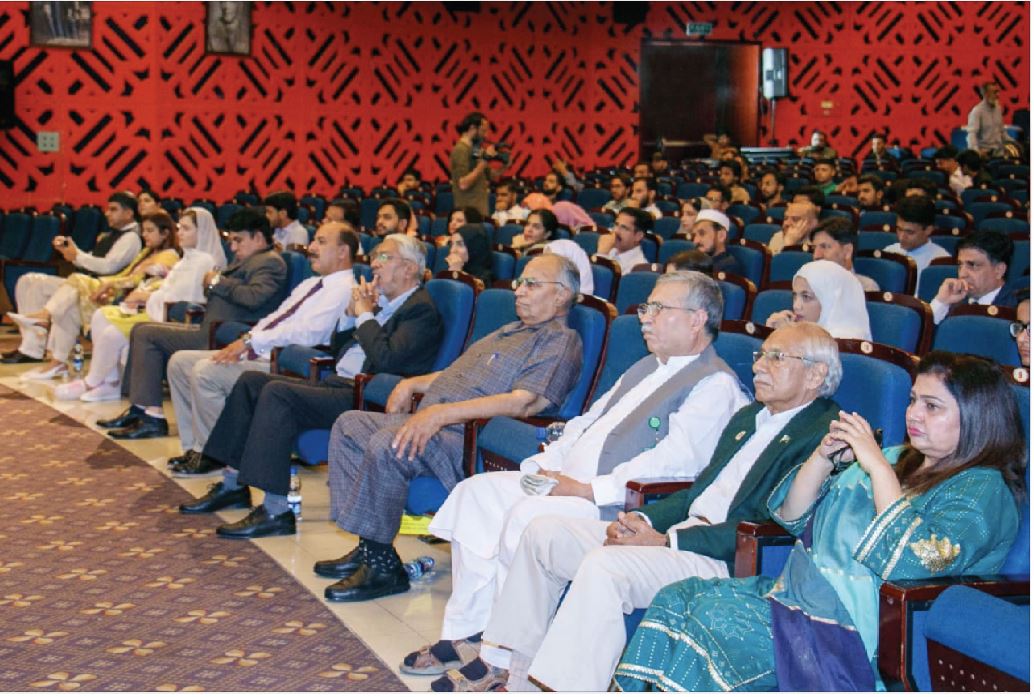 The Teams
The following teams competed for the trophy:
▪    Gilgit-Baltistan
▪    Khyber Pakhtunkhwa (KP)
▪    Federal Government Educational Institutions (FGEI)
▪    Punjab
▪    Balochistan
▪    Army Public Schools and Colleges (APSACS)
▪    Federal Board
▪    Azad Jammu and Kashmir (AJK)
▪    Sindh
▪    All Pakistan Private Schools' Federation (AAPSF)
Conduct of the Competition
The competition was divided into the following parts:
Part 1. Quiz based on the questionnaire.
Part 2. Pictorial recognition.
Part 3. Rapid fire questions.
The competition was very well contested and it was heartening to see the children grasping the history of Pakistan struggle and knowing about the patriotic personalities who sacrificed and gave their best for Pakistan Movement and the birth of Pakistan.
Results
The results of the competition are as under:
1.   Winners
FGEI Team (Rehab Jillani, Noor-e-Eman, Alishba Ansar)
2.  Runners Up
Sindh Team (Musadique Manzoor, Haseeb Ahmed, Syeda Asra Btool) 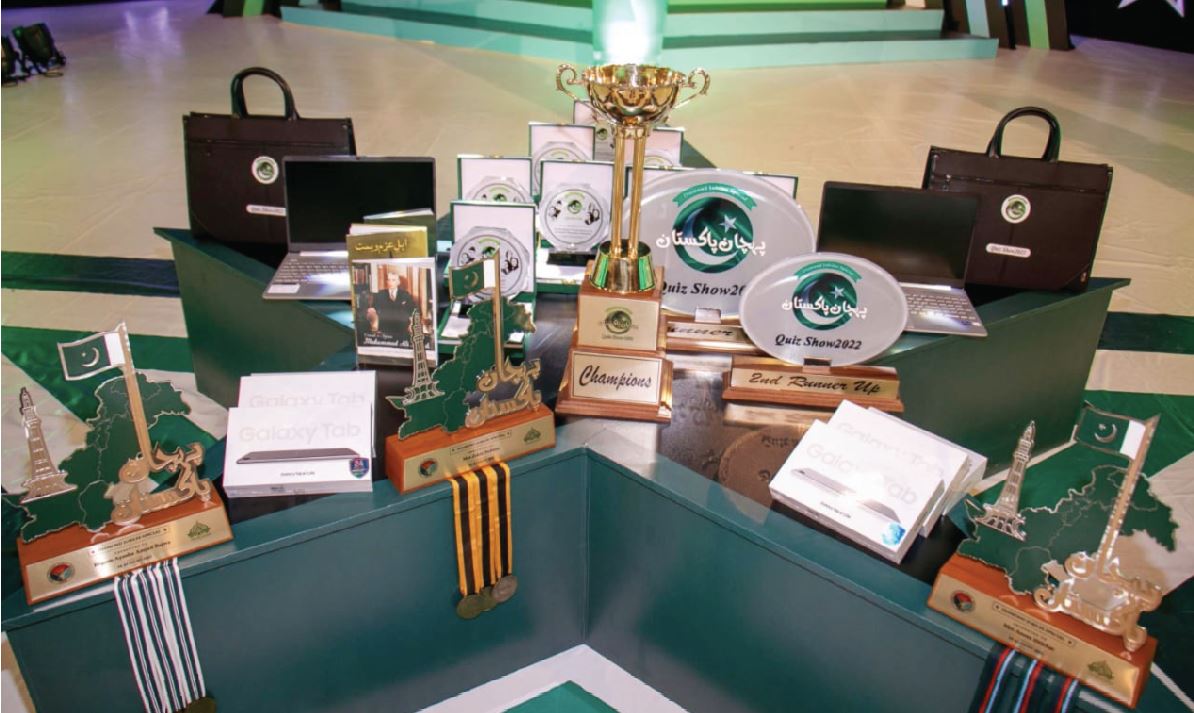 Guests of Honor
One of the highlights of the event was the inclusion of two veteran ladies as the Guests of Honor, as they had witnessed the birth of Pakistan and been in the company of the leaders of the Pakistan Movement. The ladies were:
Zakia Sultana
She was born in Jalandhar in 1926. She is the daughter of Mian Abdul Majeed, the founding member of Pakistan Muslim League (Jalandhar) in 1919. On the eve of partition, a mob gathered outside their estate threatening them to leave immediately. They were given refuge by Sikh neighbors till they left for Lahore. On the way, she witnessed a lot of bloodshed. She studied in Government College Lahore and was also a member of the Girls Guides Association. She gave guard of honor to Mr. Liaquat Ali Khan in Sargodha. She further pursued her studies from Government College Multan and graduated in Mathematics. She also won a competition and received a prize from Fatima Jinnah. Her husband, Mr. Muhammad Abbas (Deputy Surveyor General of Pakistan) also remained a Prisoner of War (POW) in 1971. She did a lot of social work with Red Crescent for the benefit of Pakistani POWs. She is also the founding member of an Islamabad based Non-Governmental Organization (NGO), which has done immense work in various sectors for several decades. Most notable was during the 2005 earthquake and Punjab flood relief efforts. Her NGO also provides monetary educational support. She is a mother to two daughters and both sons-in-law were in the Army. Both of them belong to 1st Spec Course, commissioned during the 1971 War. Major (Retd) Aziz ul Aman Zuberi and Lieutenant General (Retd) Syed Absar Hussain. Ms. Zakia Sultana presently resides in F-10/4, Islamabad with her younger daughter, Rabeeya Absar. 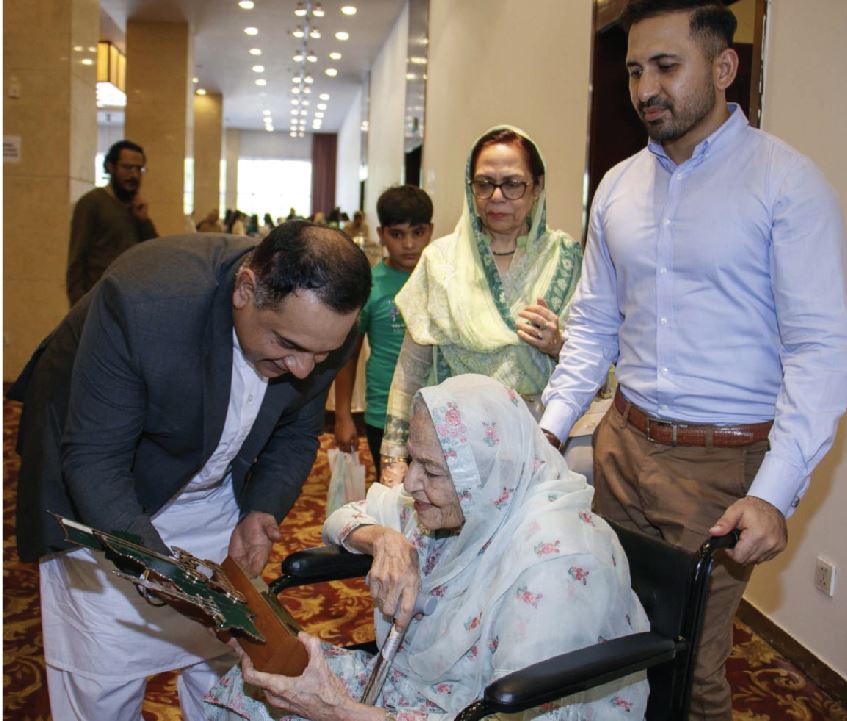 Mrs. Anis Iftikhar
90 years old Mrs. Anis Iftikhar is the daughter of Sheikh Mehr Elahi Mamdot. She was only 8 years old when Quaid-i-Azam Mohammad Ali Jinnah honored their house (Mamdot Villa) with his presence in 1940. Quaid-i-Azam left for the Lahore Resolution on March 23, 1940 with her father and uncle, Shahnawaz Khan Mamdot. She studied at Queen Mary College, Lahore and took active part in supporting the rights of the Muslims of sub-continent. She, along with her father (Mehr Elahi Mamdot) were active members of the Pakistan Movement and wholeheartedly participated from the front in all the processions of All India Muslim League. After Independence, she and her husband (Mr. Muhammad Iftikhar Qureshi) fully devoted their lives to social work, such as blood donation campaigns, providing shelter to the homeless and in the field of education. Her vision is for education to be available to every woman of Pakistan for a sustainable future. 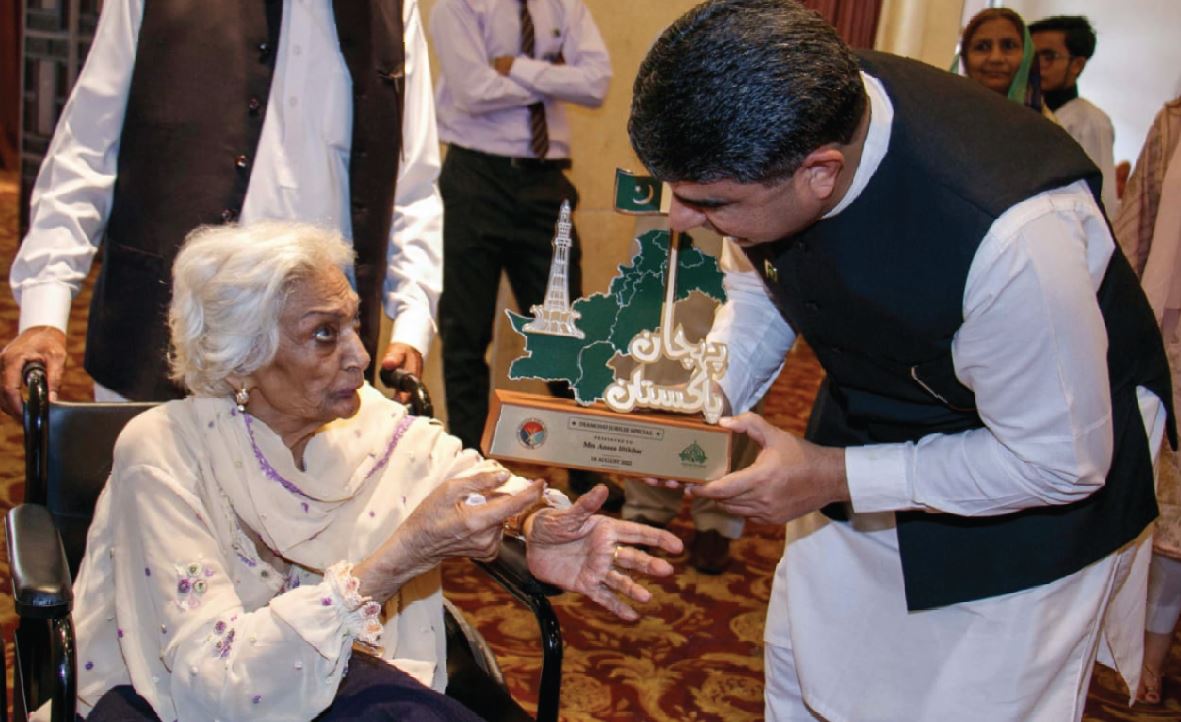 The day rounded up very fruitfully, where everyone benefitted. Director Productions ISPR, Brigadier Imran Naqvi and his team of professionals put everything together with clockwork precision, the PTV team headed by Mukesh Kumar, the jury/judges, and last but not the least, the programme owes its success to the ever dependable and charismatic, Tauseeq Haider of PTV as host/anchor – everyone adding their effort to bring a successful show to a great conclusion. 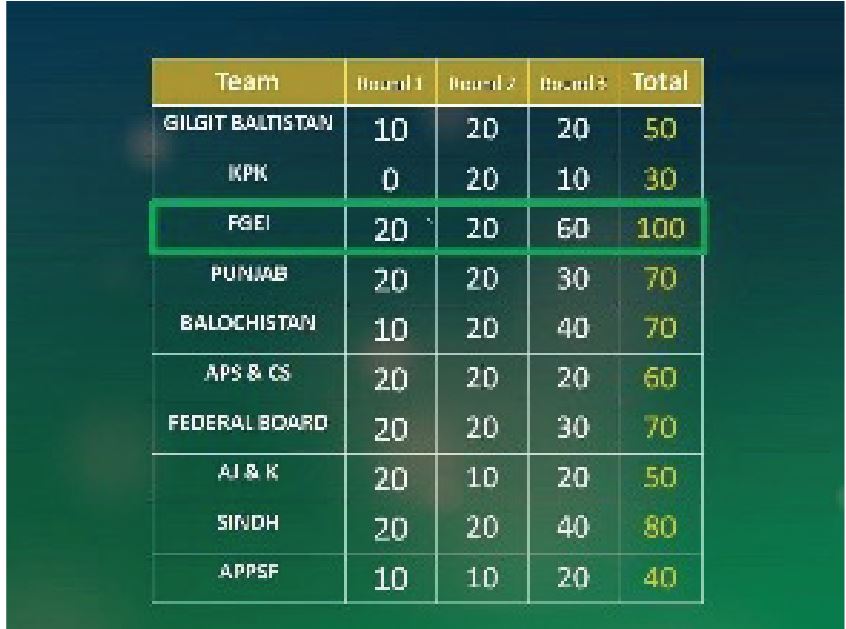 At the end of the competition, Managing Director PTV, Mr. Sayed Mubashar Tauqir Shah gave away the prizes.