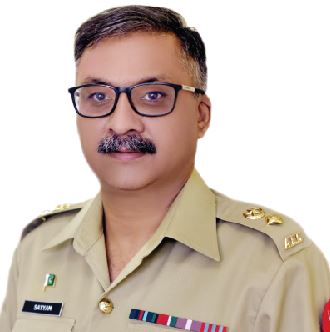 A Tribute to the White of Pakistan’s Flag

A display wall at Army Museum Lahore has been dedicated to the non-Muslim shuhada of Pakistan Army who have laid down their lives for the country since independence.

White color of the flag represents non-Muslim Pakistanis. Before, during, and after independence, all non-Muslim communities played a vital role in nation-building. Christian, Sikh, and Parsi leaders joined Muslim brothers under the leadership of Quaid-i-Azam Muhammad Ali Jinnah. Non-Muslim officers and soldiers fought against the enemies of the motherland in all the wars, including the war against terrorism. Some gave their lives in the battlefield and some came back as ghazis. A few hardworking and professional non-Muslim officers reached the rank of General officers. 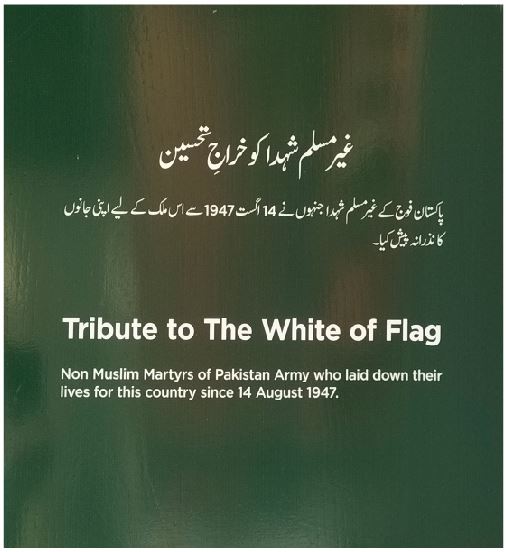 During the making of Army Museum Lahore, special consideration was given to the role of non-Muslims. On the one hand, a display wall, Tribute to the White of Flag, is dedicated to the non-Muslim martyrs, while on the other hand, twelve non-Muslim leaders of Independence Movement have been displayed under 100 Iconic Personalities of Pakistan Movement. In addition, the bravery of first non-Muslim General of Pakistan Army, Major General Julian Peter, in the Battle of Hilli (1971) has also been displayed. The details of all these three displays are given below:
Display Wall: A Tribute to the White of Flag
This wall display depicts the photographs and names of the non-Muslim shuhada of Pakistan Army who laid down their lives for the country since August 14, 1947. The idea of a tribute to the non-Muslim martyrs was proposed at a conference; it was discussed in the Corps Headquarters and finally approved. I went through the Shuhada data of Pakistan Army since 1947 and identified the non-Muslim martyrs. We approached their units and regimental centres for the provision of photographs. The total number of non-Muslim martyrs was 73 (from 1947-2016), however, only 39 photographs were available.
We obtained the postal addresses of these martyrs from their regimental centres and units. Letters were sent to those postal addresses, and as a result, we were able to get a few more photographs. A few families left those locations and we were unable to trace them. Through Commander Mathew, a retired Christian Naval officer, we also approached different Christian organisations for the provision of photographs of these martyrs. We also requested him to help us reach their families. In a few cases, families were traced but the photographs of martyrs were not available. We sent our artists to the families and they drew sketches of the martyrs with the help of the details provided by the family members. A few photographs were in civilian dresses; our artists used the faces of the martyrs and replaced civil dress with the uniform. Despite all the efforts, we were unable to find the photographs of thirteen martyrs. In the display, in the designated space of photographs of these 13 martyrs, only their names have been mentioned.
The wall is designed as a clustered collage with pronounced white color. The white color of the flag represents the non-Muslims. The names of missing photographs are written on green plates. Like the rest of the galleries, space has been left for the future martyrs.
Most of these martyrs are Christian by faith, while one is a Hindu. There are three officers, the senior most non-Muslim martyr is Major Sarmas Rauf, Tamgha-i-Basalat. The only Hindu martyr is Craftsman Ashok Kumar, Tamgha-i-Basalat. Six brave non-Muslim sons of the motherland have been awarded with gallantry awards. Two of them have already been mentioned above, while the other four are non-combatant (enrolled) Majeed Masih, non-combatant (enrolled) Adeel Asif, Sapper Murad, and Sapper Haroon Javed, all of whom were awarded Tamgha-i-Basalat. The non-Muslim brave sons of the motherland sacrificed their lives in the wars of 1948, 1965, 1971, and the war against terrorism. 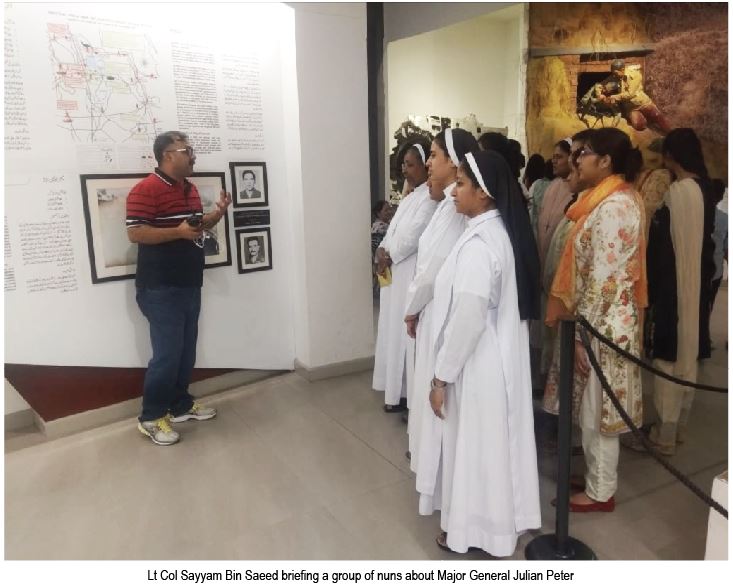 Iconic Non-Muslim Heroes of Pakistan Movement
A large number of non-Muslims took part in the Independence Movement. The details of a few are displayed in the museum. Most of the data was collected from Nazaria-i-Pakistan Trust, while the remaining research was carried out by Ms. Syeda Aamna Nadeem and late Brigadier Khan Ahmed Sufyan (R). A brief account of some of these prominent figures, in the order of date of birth and as displayed in museum, is given below:
Jamshed Nusser Wangee Mehta. He was born in 1886 in Karachi. He was the leader of Parsi community who played a very important role in the Pakistan Movement. He and his community were great supporters of Quaid-i-Azam. He became the first mayor of Karachi after independence, rendering tireless services in the rehabilitation of the migrated population.
Victor Turner. He was born in 1892 in Kensington, England. He was one of the founders of the Federal Board of Revenue. He was an English-Pakistani civil service officer and one of the founding fathers of the civil services of Pakistan. He served as the first Finance Secretary of Pakistan in the government of Prime Minister Liaquat Ali Khan. He also served as Chairman of the Federal Board of Revenue from August 14, 1947 till February 1, 1950. He took an active role in the Pakistan Movement and was one of the main Christian leaders of the movement. He was awarded Sitara-i-Imtiaz for his selfless services for the country.
Dewan Bahadur S. P. Singha. He was born in 1893 in Sialkot. He was an important personality in Pakistan’s history. Mr. Singha was speaker of the United Punjab Assembly and he played a vital role in Pakistan Movement. Being a speaker, he used his decisive casting vote in the Assembly of United Punjab in favor of Pakistan and supported Quaid-i-Azam’s vision of a separate, sovereign, and an independent Pakistan. He remained a member of Punjab Assembly as a candidate of All India Christian Association from 1936 till 1949. He has the honor of being the last Speaker of the Punjab Assembly before partition. Moreover, he was the first Speaker of the Punjab Assembly after the creation of Pakistan. Government of Pakistan issued a postal stamp in his honor on April 30, 1950.
Joshua Fazal-ud-Din. He was born in 1903 in Jhelum. He participated in the annual meeting of All India Muslim League in Lahore on March 23, 1940, when Lahore Resolution was passed. He served as a lawyer for the Christian community. In the last days of British India, when Quaid-i-Azam visited Lahore as a part of his campaign to get support of the minorities, he met Joshua Fazal-ud-Din, who declared unconditional support of the Christians for Pakistan. When the resolution to join Pakistan or India was moved and voted upon in the Punjab Legislative Assembly, all the three Christian members voted in favor of Pakistan, which turned the tables in its favor.
Justice Alvin Robert Cornelius. He was born on May 8, 1903 in Agra. He graduated from Allahabad University and Selwyn College, Cambridge, UK with LLM in Law and Justice. He joined the Indian Civil Service in 1926. He served in Punjab, where he held the positions of Assistant Commissioner and District and Sessions Judge till 1943. Later, he joined Law Department of Government of Punjab as a Legal Remembrancer. In 1946, he was elevated to the bench of Lahore High Court. He was one of the prominent and outspoken Christian figures supporting Pakistan Movement and closely collaborated with Quaid-i-Azam. He felt that the creation of Muslim homeland in India was a key solution to the ill-treatment of Muslims and Christians by the Hindu-dominated Congress Party. From 1950-1951, he served as Secretary of Law and Labor and in 1951, was appointed as 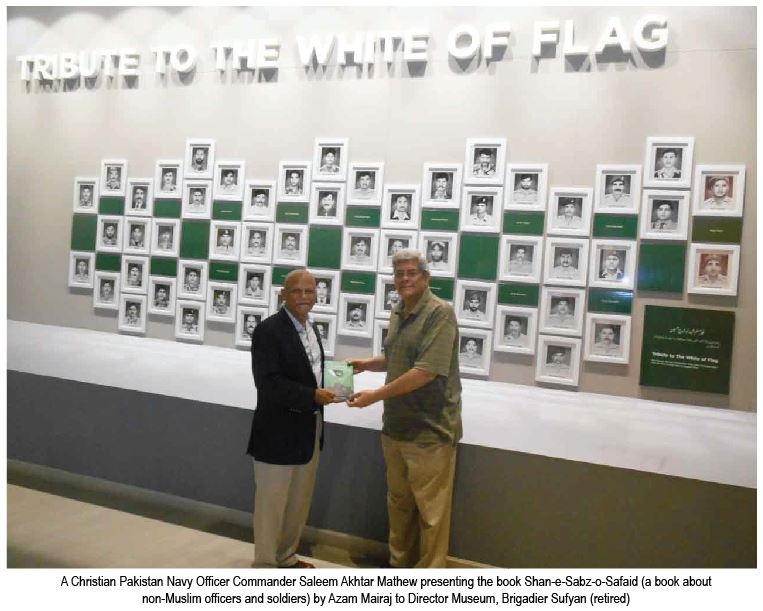 an associate judge of the Supreme Court of Pakistan. In 1960, he was appointed as the first Christian Chief Justice of Pakistan.
Faustin Elmer Chaudhary. He was born on March 15, 1909 to a Christian Rajput family in Saharanpur, British India. He graduated from Forman Christian College, Lahore. Affectionately known as chacha in the journalist community, he is credited to have introduced innovative features to photojournalism. His coverage of Pakistan Movement, 1947 Muslim Refugee Holocaust, and its aftermath has become an ingredient of Pakistan’s history. He worked with Pakistan Times from 1947-1973 as a staff reporter. He was the founder president of Lahore Press Club. He was awarded Tamgha-i-Khidmat, pride of performance, and Tehreek-i-Pakistan Gold Medal. He was the proud father of the 1965 and 1971 War hero, Group Captain Cecil Chaudhry, Sitara-i-Jurat. He died on March 15, 2013.
Major William Alexander Brown. He was born in Melrose on the Scottish Borders on December 22, 1922. He was commissioned as a Second Lieutenant in the 10/12 Frontier Force Regiment in 1941. As the Commandant of Gilgit Scouts, he led the Freedom Movement against the Dogra State occupation forces after the Raja of Kashmir decided to join the Republic of India instead of Pakistan against the wishes of the people of Gilgit-Baltistan. He thus played a pivotal role in deciding the future of Gilgit-Baltistan. He died on December 5, 1984. For his great contribution, he was awarded Sitara-i-Pakistan on August 14, 1993. His widow received the medal on Pakistan Day, March 23, 1994.
Major Julian Peter. A photo frame of Major Julian Peter along with the photograph of Lieutenant Colonel Akhlaq Abbasi, Sitara-i-Jurat, Commanding Officer 4 Frontier Force Regiment has been displayed in 1971 War gallery. Major Peter later became the first non-Muslim General of Pakistan Army. The details of his bravery at Hilli are highlighted in the panel.
A Brief Account of Events of the Battle of Hilli
On the night of November 21-22, 1971, Indian 202 Mountain Brigade attacked Hilli and tried to surround village Naopara. ‘D’ Company of 4 Frontier Force Regiment, commanded by Major Julian Peter (Later Major General) repulsed the attack with heavy casualties. At 1100 hours on November 23, 1971, the enemy brought in a squadron of PT-76 Tanks and managed to secure Naopara. On December 4-5, 1971, Indian 202 Mountain Brigade turned towards Hilli. A and C Companies of 4 Frontier Force Regiment and a platoon of 13 Frontier Force Regiment faced the enemy who attacked repeatedly but could not succeed.
In the Battle of Hilli, the officers and men of 4 Frontier Force Regiment fought with extraordinary courage and inflicted heavy casualties on the enemy. The bold actions deterred the enemy who couldn’t capture the Headquarters of 205 Infantry Brigade located at Bogra.