A Tough Summer Ahead on the Line of Control

As 2019 drew to a close and winter set in, the annual total of ceasefire violations (CFVs) by India across the Line of Control reached an all-time annual high of 3,351. The deep winter snowfall along much of the Line of Control slowed the growing surge of attacks momentarily but with the warmer weather starting to melt the snow, the numbers are already escalating for 2020. The first attack took the life of Chaudhry Ishtiaq, a young man in Nidhi Sohana in Kotli District, in early January. He was the first casualty of what is likely to be a challenging and dangerous year for the people of Azad Jammu and Kashmir.
In 2003, the number of CFVs by India stood at 11. Over the years since, the numbers have continued to escalate culminating in the alarming 2019 total. During the year, 52 civilians were killed and 261 left with life-long injuries. Men, women and children, living and working peacefully in and around their homes, going to the markets and to school, became victims of the aggression. In May, a woman in Kotli and a boy in Poonch, and in July, four people in Nakyal. In September, a 60-year-old woman and 13-year-old boy in Nakyal. In October, 6 civilians in Muzaffarabad and Neelum Districts. The list goes on. So many innocent lives have been destroyed because of the Indian Army’s deliberate targeting of civilians.
In February 2020, Indian troops fired on villages in the Neelum Valley that were receiving food assistance to get communities through the overwhelming snowfall and avalanches. Although on this occasion no lives were lost, however, numerous homes were destroyed or seriously damaged. This creates another burden for people who are simply trying to live their lives in peace and to get meagre incomes due to their remote location. Rebuilding a home, no matter how humble, is a costly exercise and with little income, almost impossible.
Not only do humans fall victim to this murderous onslaught but also their animals – one of the prime sources of income for these rural families – are targeted and crops destroyed. The loss of income and nutrition these assets provide leave a profound impact on the health and wellbeing. How does one exist in such circumstances? Azad Jammu and Kashmir is a spectacularly beautiful part of the world, especially the areas along the Line of Control (LOC). It should be a tourism paradise, but the risks of shelling from India make it unsafe for tourists to visit much of the time.
Tourism would provide livelihoods for thousands of people and increase the overall wellbeing of communities. People would have better access to decent incomes to improve their family’s quality of life and opportunities for future generations. But until the Indian Army stops targeting them, their lives remain at risk and without decent prospects for a prosperous future. 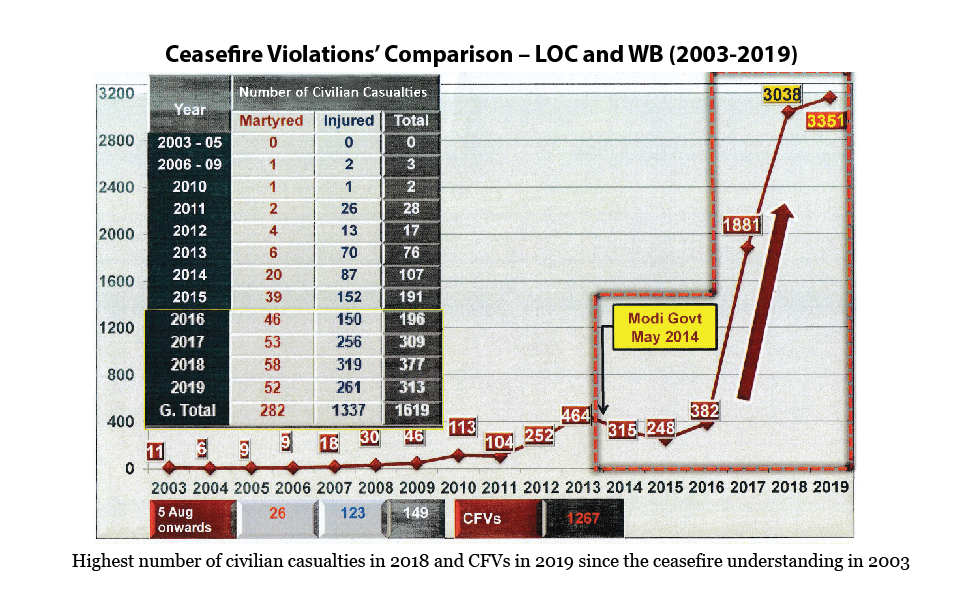