A Pakistani in Beijing

As a Pakistani-American, I am accustomed to the familiar Western media stereotype of Pakistan as "a nation of terrorists." Yet I was surprised to discover this was not the case in China. On the contrary, when people learned of my Pakistani background, I was treated with respect, kindness and affection. They would say, "You are family." Sometimes strangers would take selfies with me, as if I was a movie star, after they discovered my Pakistani connection. Pakistanis feeling down because of the nonsense in Western media should visit China to cheer themselves up. The Chinese talk of Pakistan as an "all-weather friend," reflecting exactly how Pakistanis see them as well. The Chinese in private will go through the list of other close allies and point to their flaws: the North Koreans are seen as erratic, the "crazy younger brother," a scholar at a dinner remarked; Burma or Myanmar has let them down and they can never fully rely on Iran, according to another scholar, as it appears "too keen to be seduced by the U.S". That leaves Pakistan – and Pakistan alone, in spite of its alliances with Western nations, has stood by China through thick and thin. China has reciprocated with a mixture of emotion and realpolitik – it has just signed its biggest defence deal ever according to analysts, which gives Pakistan eight first-class submarines. It is a strange and unusual love affair. 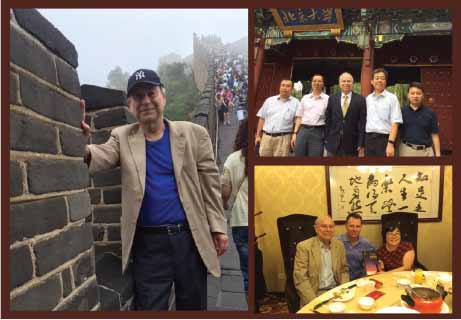 Pakistan too views China as a steady friend, even a kind of "elder brother." Pakistanis like to repeat the slogan that is popular with the crowds when Chinese visitors are in Pakistan, "Pakistani Chini bhai bhai" or "Pakistani Chinese brother brother." It is Pakistan's geopolitical situation that prompts this special relationship with China. While Pakistan has had close relations with the United States almost from the origins of its foundation, they have been sometimes difficult. Pakistanis have consistently felt they have stood by the United States through the decades, and sometimes risked their national integrity on behalf of the United States—for example when the U2 was shot over the Soviet Union and Khrushchev famously drew a red circle around Peshawar and threatened to blow it up the next time if such a thing is occurred. The United States, Pakistanis feel, has not always been loyal. Pakistanis will point to the 1971 war with India when the Soviets stood by their ally, India, while the United States vacillated and did not come to its aid. After the Soviet withdrawal from Afghanistan, Pakistanis felt that they had a cause to require American assistance in rebuilding those parts of Afghanistan and the borderlands of Pakistan that had been affected by the fighting lasting a decade, once again the Americans again simply packed up and left. These repeated let downs have created a sense in the Pakistani’s minds that Americans are not reliable friends. In short, they are not "all-weather" friends. In contrast, Pakistanis will point to the Chinese and say that these are our "all-weather" friends. One great symbol of this friendship is the famous Karakorum Highway (KKH) running along the northern regions of the river Indus along some very difficult passes and mountains which connects to the Chinese border and was constructed by thousands of Chinese and Pakistani labourers toiling in the most difficult conditions. It is said that one life was lost for every kilometre of the road. This wonderous road-link further consolidated the ties between the two nations. Another geopolitical reason is the presence of India, which is seen as constantly intimidating and threatening Pakistan. Having fought three wars, Pakistanis tend to be wary of Indian intentions towards them. It is crucial therefore for Pakistanis to have a geopolitical counterbalance to the larger neighbour with a far greater army, economic capacity, and population. It is for these reasons that Pakistan takes great pride in its relationship with China and even tends to overlook the inner tensions which have been created in China as a result of its highly centralized structure and its dealing with its minorities, particularly in the Xinjiang province which borders Pakistan. In fact, Pakistan has always disassociated itself with any Uighur attempt towards separation or independence from China. China remains of high priority to Pakistan and it will not let human rights struggles come in the way. There are, however, few underneath contradictions and tensions that do exit – though successfully managed or ignored by both sides. Pakistanis are an overwhelmingly Muslim nation, and Islam, because of the tense political situation in Xinjiang, is not a popular religion in secular China today. There is also a public debate about the extent to which Pakistan should be supported. Those opposed to it point out the nature of Pakistan's corrupt politics and breakdown of law and order. However, the broad Chinese view of Pakistan is that of a favourite younger brother constantly landing in trouble. The Chinese will express their protective affection for Pakistan and in the next breath talk of the need to ensure its stability and encourage its prosperity.

It is this relationship that explains one of President Xi's central pieces in the "One Belt, One Road" policy – the China-Pakistan Economic Corridor (CPEC). Xi's commitment may be gauged by the fact that he has announced some 45 billion dollars for the project. It is breathtaking in its scope and vision and could alter the fate of the beleaguered Pakistani nation. It is a plan to connect China by road and high-speed train to the port of Gwadar on the Pakistani coast and transform the sleepy little town into a major international commercial and trading hub like Dubai across the Gulf. There would be economic spin-offs as trade and commerce would grow along the corridor.

The current global geopolitical alignment for the first time in history has both the U.S. and China maintaining good relations with both India and Pakistan. While noting the unmistakable affection for Pakistan in China, I saw no overt signs of hostility towards India. On the contrary, Chinese scholars talked with optimism of the new relationship between China and India. They pointed to President Xi's visit to India and Prime Minister Modi's visit to China, which were conducted in an atmosphere of cordiality and resulted in billions of dollars in economic deals. But reality warns that India and Pakistan are so conditioned by their hateful rivalry that they will turn any event to their favour and against their opponent. Prime Minister Modi’s objections conveyed to the Chinese leadership during his recent visit to China regarding CPEC is a clear example of this attitude. Perhaps the vast economic and political benefits that are possible in China's initiatives will influence them in this case. In spite of the numerous naysayers, those of us who dream of a peaceful South Asia taking its place on the world stage as a cultural and economic powerhouse see a ray of hope in today's situation.

The writer is an eminent scholar of international repute. He is the Ibn Khaldun Chair of Islamic Studies at American University in Washington, D.C. His most recent book is ‘The Thistle and the Drone: How America's War on Terror became a Global War on Tribal Islam’ (2013). He has served as Pakistan's High Commissioner to the UK and Ireland.