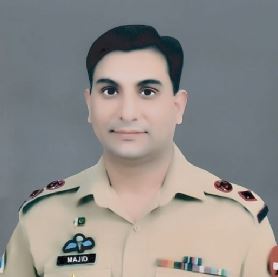 50 years to Chhamb’s glorious victory was celebrated with full zeal and fervor on December 7, 2021, at Chhamb, now called Iftikharabad, named after the undefeated and zealous son of the soil, Major General Iftikhar Janjua shaheed, HJ & Bar, SPk, SQA. Major General Janjua, the most decorated and dynamic general officer of Pakistan Army, played a key role in the victory at Chhamb while commanding his division from the front. 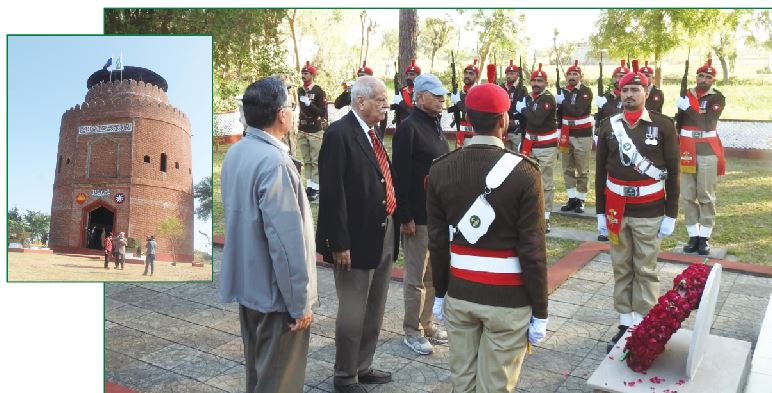 He embraced shahadat in the warzone and came to be known as ‘Faateh Chhamb’. Four war veterans of the 1971 War, Chhamb Sector participated in the 50 years celebrations right at the place of victory: Col Rauf, Commanding Officer (CO) 23 Baloch (Toofan Battalion), Brig Zahoor, Second in Command 23 Baloch, Brig Waqar Durrani, 3 Frontier Force and Major Nisar Ghumman, 28 Cavalry. The veterans visited Haider Minar, right at the center of victorious land of Chhamb. Pakistan Army conquered this land in both 1965 and 1971 wars (288 sq kms and 127 sq kms respectively) and is a real manifestation of valor and courage of Pakistan Army and our valiant nation. It is a proof of our soldiers’ passion for shahadat and true association with Hazrat Ali’s title ‘Haider’. The veterans were briefed that Haider Minar resembles 15th Century’s Turkish Rumeli Hisar and reflects

Punjab’s and Kashmir’s culture as well. The Brigade Commander assured the veterans and the nation that they will jealously guard this precious victory and that the ultimate objective would be Akhnoor – the real dream of Major General Janjua before embracing shahadat. While taking his last breaths, he was still commited and had shown his determination by saying, “Sherro! Palanwala (foothold to Akhnoor) lena hai… warna poochoon ga” (Lions! You must get Palanwala, otherwise I will ask you).
As the veterans shared their great experiences of the battle, their determination and energy was remarkable. Col Rauf, who was at that time the CO of the leading unit and now above 90 years, is still so motivated and energetic that everyone got inspired by his dynamism and vitality. The memory of victory at Chhamb is still fresh and he remembers all his comrades and places very confidently. Brig Zahoor – the Second in Command who later took over the command of Toofan Battalion once Col Rauf got injured – kept the impetus and momentum of the attack, stormed towards the ultimate objective and captured it without any rest.  Due to this speed and swiftness, the unit was given the title of Toofan Battalion. Brig Waqar Durrani recalled his early days in the Army as a Second Lieutenant and told that everyone was so determined and energetic since they had a bold, dynamic and spirited General Officer Commanding who was found everywhere in the battlefield. The Major General even visited his mortar position and raised his morale. Last but not the least, Major Nisar Ghumman, the son of charging 28 Cavalry, played an active role in the capture of Chhamb. As per Col Rauf, Major Nisar was a tall, daring, fast and furious man in black who was dashing everywhere with speed and valor. Major Nisar’s 28 Cavalry captured 41 prisoners of war, 11 tanks and a vast caché of arms and ammunition.
The veterans visited the captured Indian District Headquarters Hospital and rejoiced at their memories. At the end they visited Iftikhar Memorial Monument, the place where Major General Janjua’s helicopter crashed.  They laid a wreath and paid tribute to their most daring and devoted General and all those who were a part of this glorious victory. They called Major General Januja a real warrior, a lionhearted general who had an excellent track of soldiery and warcraft as in 1965, he was titled as the hero of Rann of Kutch and in 1971 as Faateh Chhamb.  Major General Janjua is one of the only two Generals of Pakistan Army to die in active combat. The Brigade Commander had shown his determination to guard every inch with full resolve and said that at the time of test, his brigade would not fail the nation.